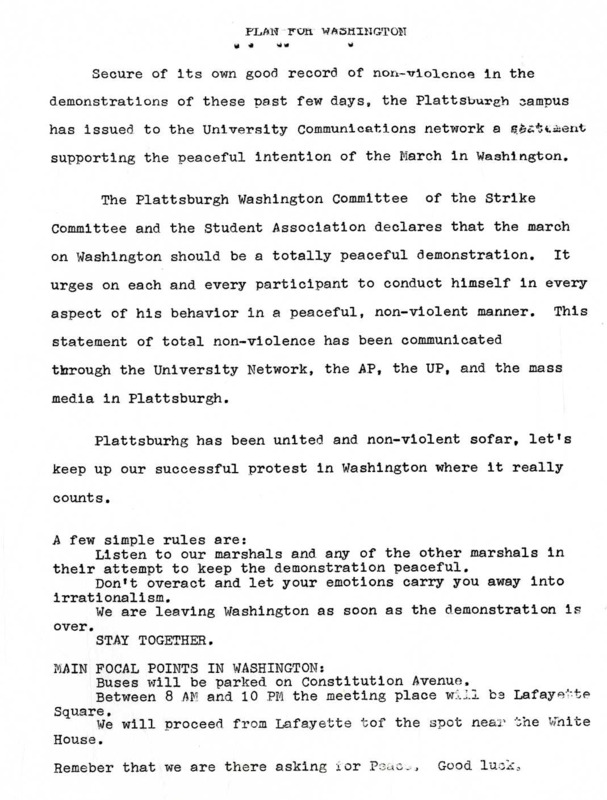 Plattsburgh State students attended numerous protests and demonstrations outside of the North Country region.  Part of the organizational strategy was to ensure that a peaceful approach was followed by all, even in difficult situations.  The above instructions were made available to those attending the mass protest connected to the student strike and the Kent State shootings.  May 1970. 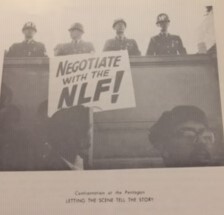 A sign demanding the US government negotiate with the National Liberation Front rather than continuing military action.

The resolve of  thousands of antiwar protestors was clearly on display at this major event.  The Plattsburgh State delegation came home buoyed by their experience.  October 1967.

The students at Plattsburgh State did not allow their distance from major cities to deter them from contributing to the national peace movement.  They made their way to protests and demonstrations further afield, and throughout the ‘60s and ‘70s joined forces with millions of others working to bring about a change both in US policy, and in the mentality of the nation.

On April 17, 1965, thirteen delegates, both students and faculty, were sponsored by Plattsburgh State to attend the Students for a Democratic Society March on Washington to End the War in Vietnam.  This march, which also benefited from the support of Women Strike for Peace and the Student Nonviolent Coordinating Committee, ended up being the largest peace protest the country had seen, with attendance estimates of 25,000.  Speakers and performers took central stage and galvanized the crowds.  Protestors sought to engage directly with Congress; however, they were rebuffed:

A group from the marchers attempted to deliver a petition, but was prevented by a host of policemen barring the way into the Capitol Building.

As the event drew to a close, a group of protestors remained to sit-in near the White House.  The Plattsburgh delegation, however, returned triumphantly to campus.

Over the weekend of October 21-22, 1967, a group from Plattsburgh State and the community attended the March on the Pentagon along with approximately 100,000 other people from all walks of life.  Beekman Street writer Mike Dorgan was part of the Plattsburgh contingent, and his report and photographs recount a consequential demonstration that spoke to the anger and heartbreak of the participants.  Speeches addressed, among other things, resisting the draft.  When a young man, with the assistance of a nun, burned his draft card rapturous cheers filled the air.

The protestors eventually travelled, under the watchful eye of soldiers, from the Lincoln Memorial to the Pentagon, where a small group managed to enter the courtyard, much to the delight of the crowd.  These individuals subsequently joined the hundreds who were arrested over the two days.  Mr. Dorgan signed off with a prescient “the weekend, but not the protest, was over."

We Don’t Hate the Soldiers; We  Hate the War!

Antiwar student movements in the New York State system collaborated to present a united front.  In these cases logistical considerations were often taken into account: above Albany State students have offered accomodation to Plattsburgh students attending demonstrations in the state capital.  May 12, 1970. 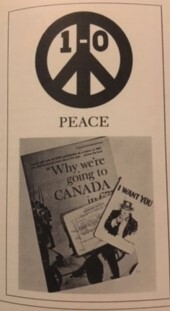 Why we're going to Canada

Image of a draft card and other documents in Beekman Street.  Plattsburgh State's proximity to the northern border gave students an opportunity to engage with draft resistors who had fled to Canada.  November 4, 1968.

When it came to cross-border travel, students benefitted from Plattsburgh State’s proximity to Montreal, which offered an opportunity to engage with part of the international community.

As the Vietnam War dragged on, people around the world increasingly voiced their opposition to the conflict.  Following a disconcerting experience at Expo '67 where students had felt the sting of anti-Americanism, a series of talks between Plattsburgh State and McGill University students was held.  Aiming to better understand Canadian-American relations, the students discussed various topics, including the war and the draft.

According to the McGill students, most Canadian students…are opposed to US intervention in what most of them believe to be a civil war…

In conjunction with reporting on the McGill meetings, Beekman Street compiled a special section profiling the situation in Canada and the appeal the country held for draft resistors seeking refuge.  Canadian law did not recognize draft evasion as either a crime or as grounds for extradition, and many support groups had popped up in Canada in order to assist draft resistors and their families.

Making contact with the Montreal Council to Aid War Resistors led Beekman Street reporters to interview a former Marine Lieutenant who had failed to obtain conscientious objector status.  He subsequently relocated to Canada after having been imprisoned and suffering physical abuse for refusing to serve in Vietnam.

The significance of this phenomena to the Plattsburgh State antiwar movement was two-fold.  Firstly, the gravitas of these men’s acts could not be overstated, and secondly, the poignant physical connection to the North Country was undeniable.  Many of the draft resistors who had made their way to Canada had travelled through the area on the last leg of their journey to a new life.  Students were able to gain first-hand understanding of yet another impact the war was having on many Americans, and to gain insight into the importance of sustained protest.

They believe that fleeing to Canada is a more effective way to fight the war than rotting in jail.

-Beekman Street commenting on the mindset of many who had resisted the draft by heading north.  December 1, 1967.