Working with the Community 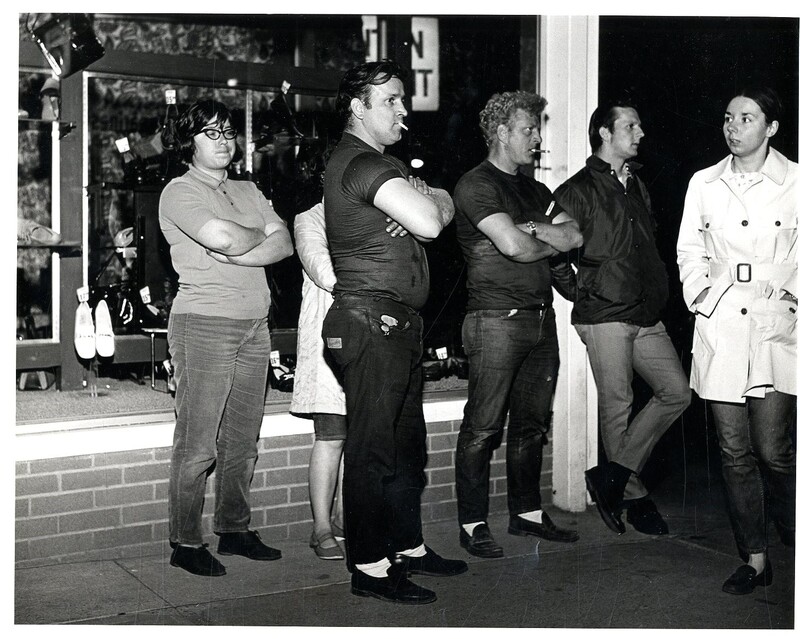 Displeased residents scornfully looking on as students gather at the Federal Office Building for a nighttime protest and vigil after the Kent State killings.  May 4, 1970.

Students involved in the antiwar movement sought connections within the greater Plattsburgh community.  They partnered with like-minded individuals and groups, while also presenting their case to more skeptical, and at times hostile, individuals.  In an area with a significant military past and where an active Air Force Base predominated, this was not always an easy feat.  Students at times were confronted by people who not only considered their ideas and actions to be a subversive assault on the United States, but also a personal affront to their civic pride and livelihood.

In order to forge relationships with city residents and to promote the antiwar message to a wider audience, students participated in canvassing and direct outreach efforts.  They often extended invitations to Plattsburghers to attend campus events and engage with the peace movement. 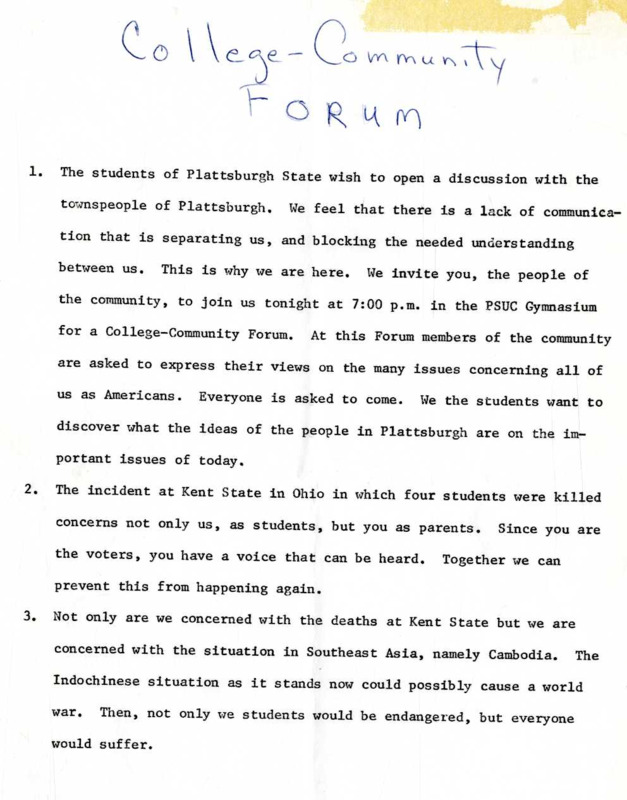 A forum was organized by students to foster exchange with the local community on the war and the killings at Kent State.  May 1970.

Working with the local government was also prioritized by the students and they found an important ally when Francis Steltzer, himself a World War II veteran, was elected Mayor of Plattsburgh in 1966.  He was unafraid to align himself with the ideals espoused by the peace movement, and participated in numerous activities, including marching with students to the Air Force Base following the Kent State killings.  In an interview with Beekman Street, he asserted the right of students to peacefully demonstrate in the city, even if it would not be to all residents’ liking:

I do know that this is a military town, proud of its heritage, with numerous war heroes and many of its boys engaged in the service today.  I think you know where most of its sentiment lies.

Indeed, Plattsburgh State students worked to maintain a presence in the city.  Marches from campus through the downtown core were regular occurrences, and peaceful demonstrations in central areas, such as the MacDonough Monument or outside the Federal Building on Margaret Street, garnered a great deal of attention.  In addition, marches to the Plattsburgh Air Force Base were of particular symbolic significance.  The Press-Republican often designated front-page reporting to these high-profile events. 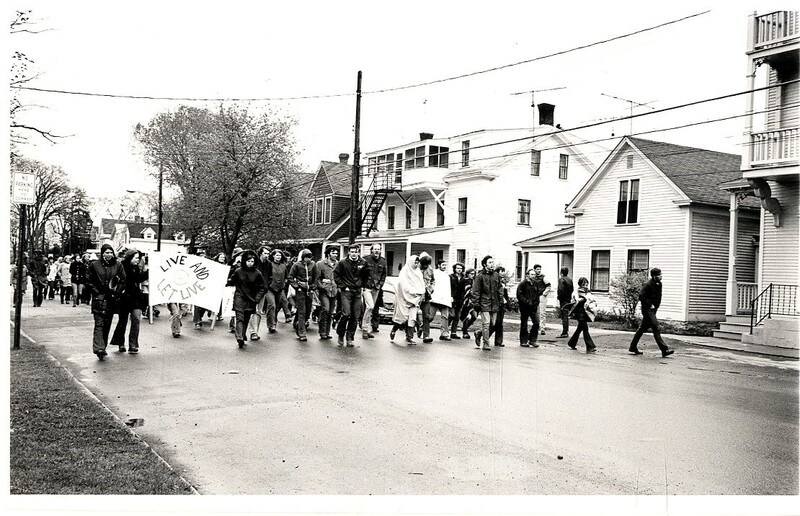 Students marching on Brinkerhoff Street towards the campus.  The banner reads "Live and Let Live."  1969 or 1970. 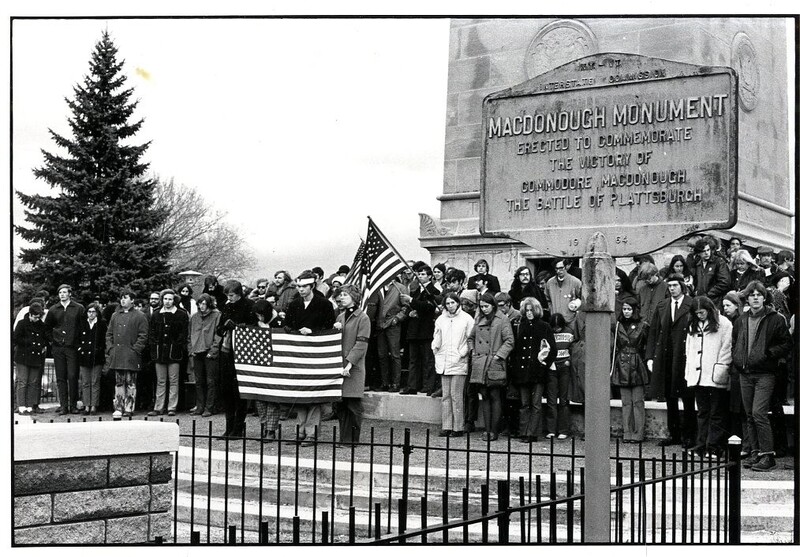 In the Heart of Downtown

Peace gathering at the MacDonough Monument across from Plattsburgh City Hall.  November, 1969. 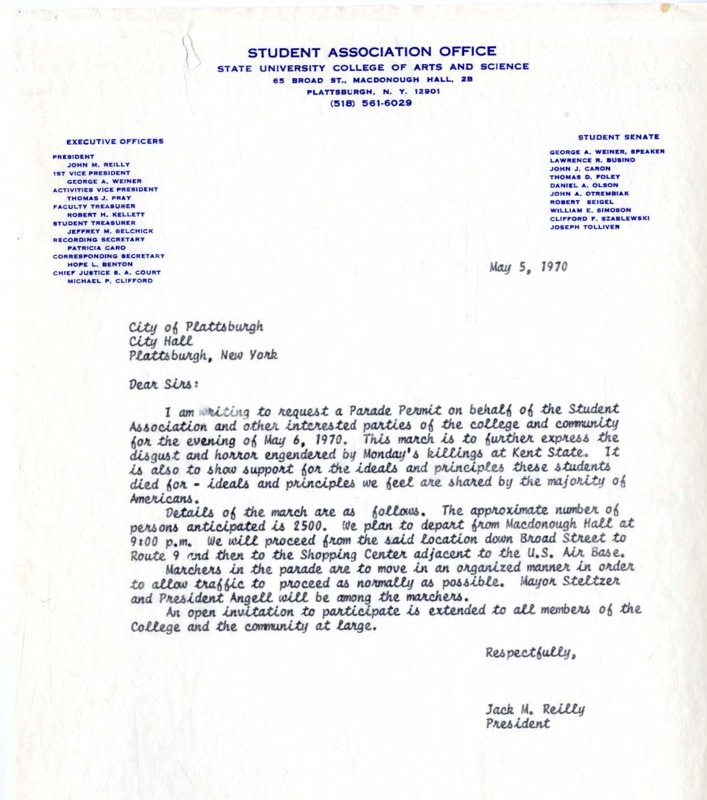 Parade permit request made in the aftermath of the Kent State tragedy.   Student Association President Jack Reilly mentions the participation of Mayor Steltzer and Dr. Angell and encourages widespread turnout to highlight the injustices in Vietnam, and those at home.  May 5, 1970. 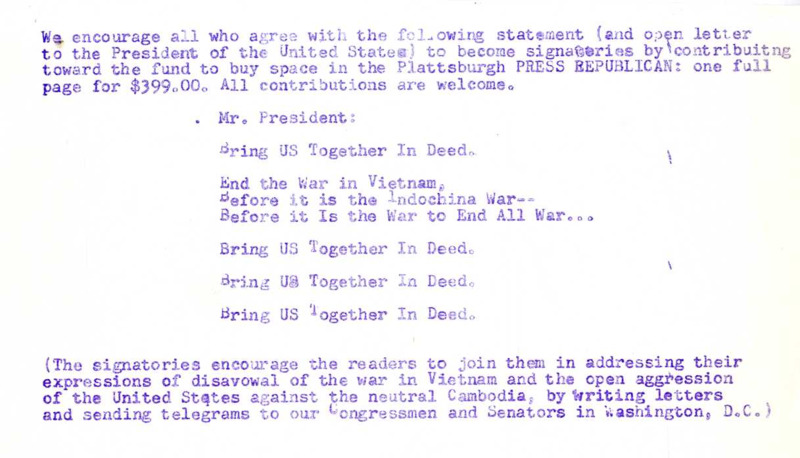 Plattsburgh State students knew that reaching out to the general public in the high-circulation Press-Republican could be effective.

Students made efforts to establish a constructive relationship with the Plattsburgh Police Department, and for the most part, these two groups engaged in mutually respectful exchanges.  There was often recognition of shared circumstances, and undoubtedly a familiarity with one another.  Students attending the overnight vigil after Kent State in May 1970 bought morning coffee and donuts for the police officers who had been on duty at the Federal Building.  At the commencement ceremony later that month, the students and Dr. Angell presented a plaque to the Police Department to highlight “…services rendered to the College community.”  The police showed their appreciation by sharing it with the students, whom they considered equally deserving. 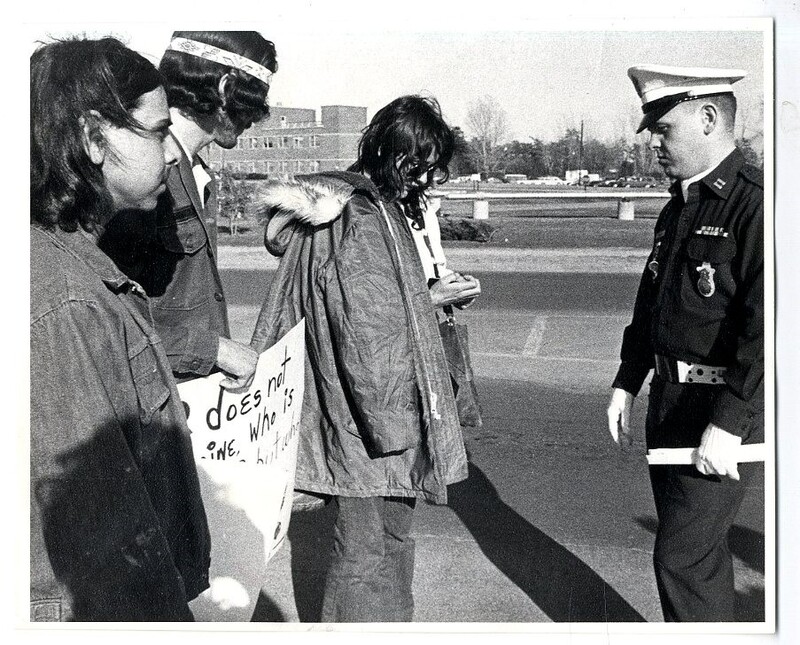 The relationship between the Plattsburgh Air Force Base and the antiwar movement was not a fruitful one; command declined to meet with students on many occasions.  Here an Air Force Security Officer makes contact with protestors.  May 1, 1972.