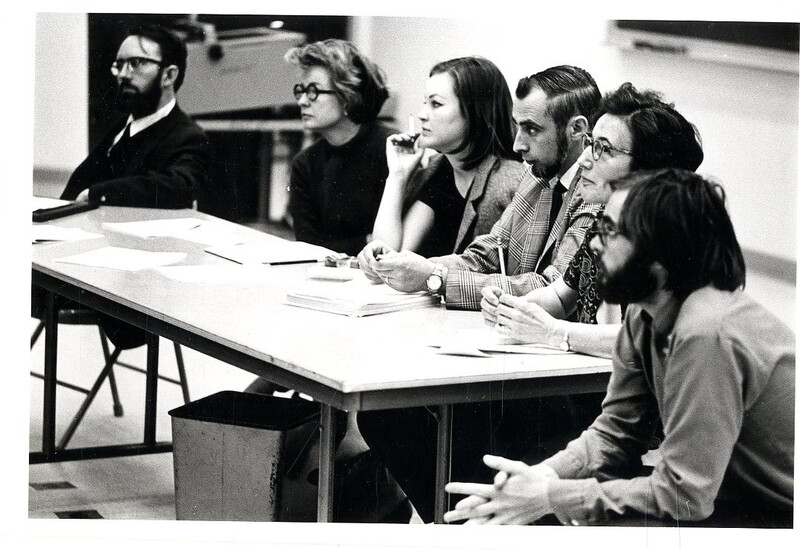 Faculty and staff participating in a teach-in during the student strike of 1970.  From left to right: Ken Loach, Margaret Engelhart, Sara Matesovsky, Robert Arnold, Vickie Alward, and an unidentified individual.  May 1970.

From the outset, numerous members of the faculty, staff, and administration at Plattsburgh State formed an important part of the campus antiwar movement.

Many had already been involved in peace and social justice movements for years prior and were able to offer experience and a seasoned perspective.  They served as faculty advisors to clubs and organizations, such as Students for a Democratic Society and the Draft Information Center, organized and participated in teach-ins and community forums, taught special seminars and classes, and supported student initiatives. 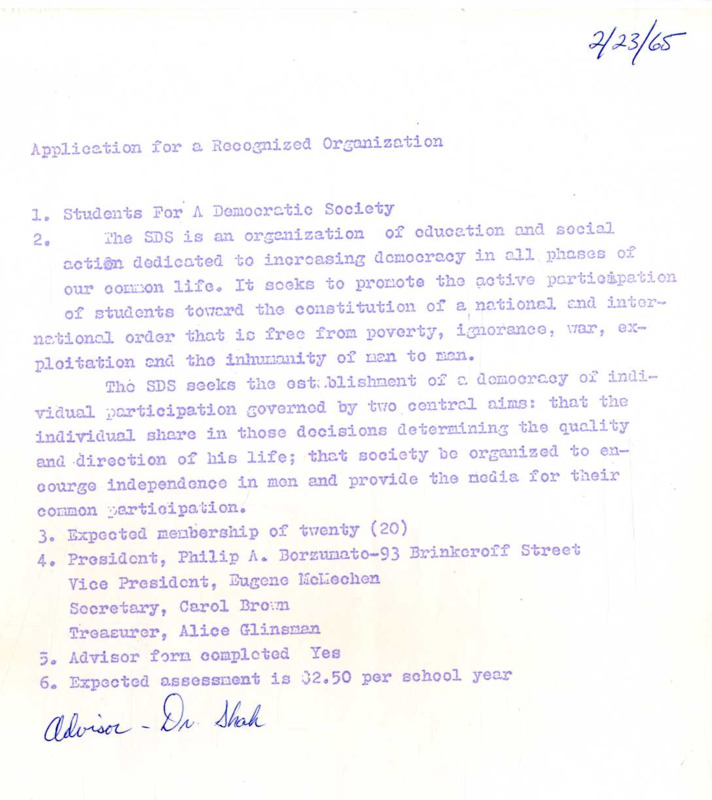 With a Little Help from My Professors

Students for a Democratic Society was considered by many around the country to be a "radical" organization.  The Plattsburgh State chapter's faculty advisor was Dr. Saïd Shah, an outspoken critic not only of the Vietnam War, but also of the status quo capitalist economy.  February 1965. 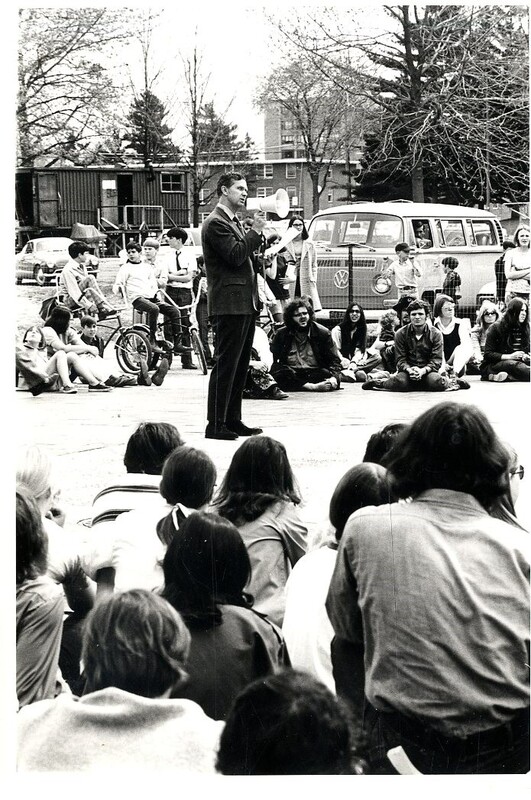 Dr. George Angell addressing students and onlookers regarding the imminent student strike following the expansion of the Vietnam War and the killings at Kent State.  May 5, 1970. 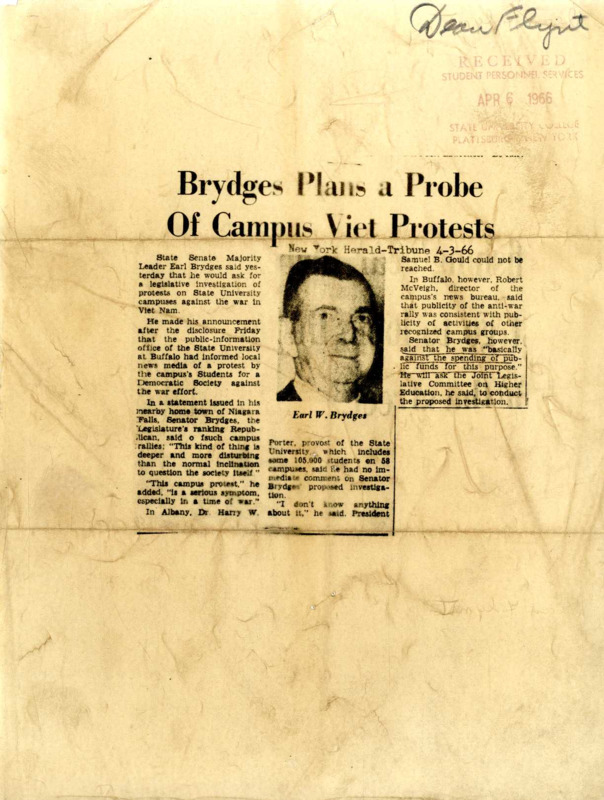 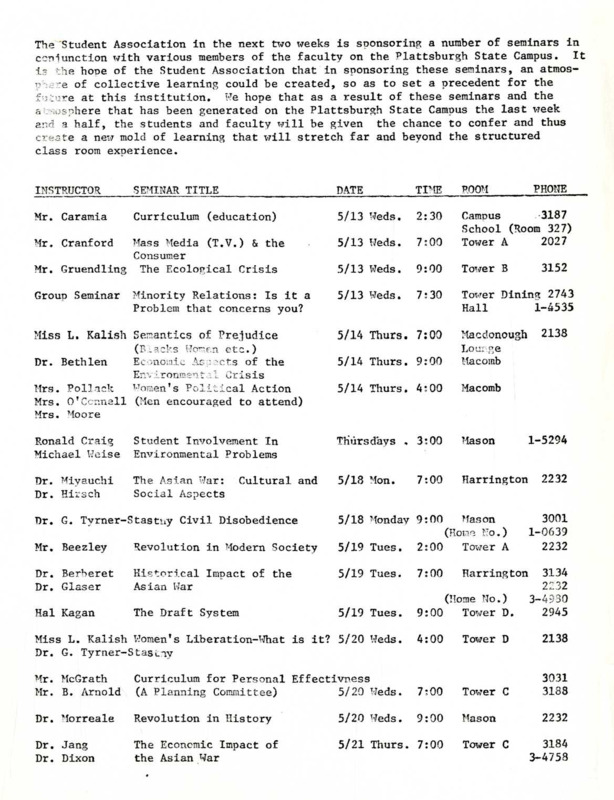 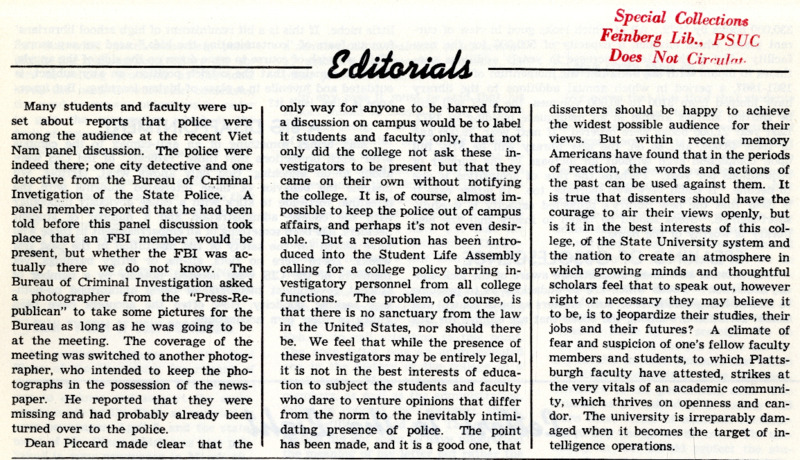 A Northern Light editorial drawing attention to the chilling effect of covert law enforcement activity on campus.  May 19, 1967. 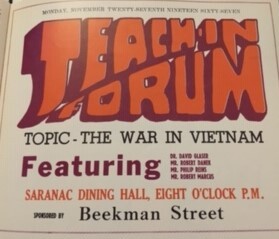 President of the College from 1954-74, Dr. George Angell made no secret of his antiwar stance and sought to craft an approach to the campus movement that was both pragmatic and in keeping with his personal views.  Even with prevailing sentiment against him, Dr. Angell remained an active participant in antiwar activity.  He marched and attended vigils with students, facilitated a sit-in at his office, supported student strikes, worked in close collaboration with the Student Association, and confronted controversy head-on.

The college’s decision to host an exhibit of Rockwell Kent’s Russian art stirred anger in many people.  The renowned artist and Au Sable Forks resident was already viewed as a “Soviet sympathizer,” and his donation of ten thousand dollars of his 1967 Lenin Prize to the National Liberation Front to be distributed, in his words, to women and children affected by the war, caused an uproar.  Angell was roundly criticized for the decision to valorize art with a Russian theme at the height of the Cold War, especially the work of an unapologetic opponent of the Vietnam War - a "traitor" aiding the enemy.  When Angell invited Kent to a luncheon, the vitriol increased:

Dr. Angell is known for his extremely liberal views, but in this instance, he seems to be stretching his liberality too far.

As held true for all in the peace movement, faculty and staff faced real risks by engaging in antiwar activity.  Potentially damaging their careers and future prospects, they were also leaving themselves open to surveillance and harassment by authorities seeking to intimidate voices of dissent into silence.  Accusations of “indoctrinating students” was part of the moral injury they had to contend with, in addition to the hostility of their own colleagues at times.

…it was alleged by [Social Sciences Chairman] Dr. Bernstein that the Teach-In was being “staged” by Dr. Shah and SDS [Students for a Democratic Society]…Dr. Eugene [L]ink was the moderator and later reported “pressure and opposition” from Chairman Bernstein concerning the Teach-In. 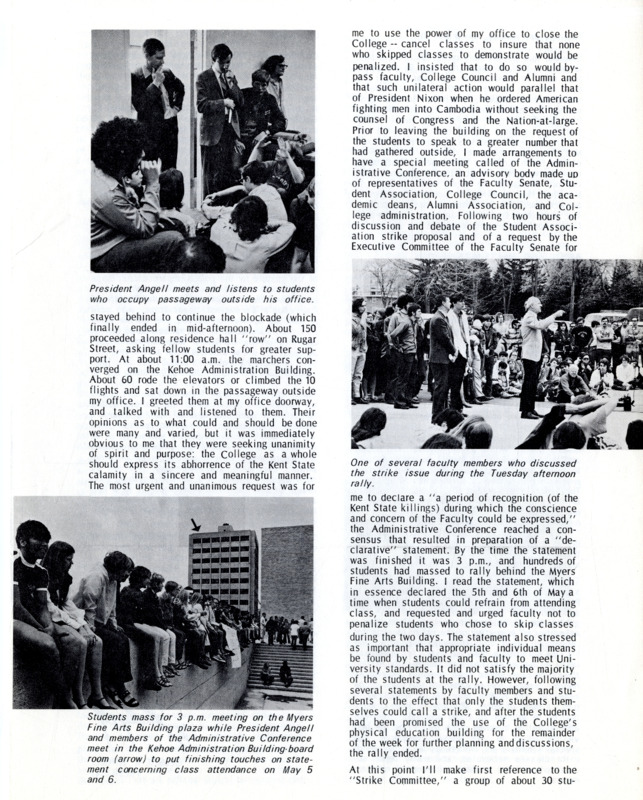