In 1965, President Johnson’s escalation of the war in Vietnam became a catalyst for increased protest and resistance on campuses around the country.  Teach-ins had gained popularity among students as this town-hall format fostered debate and open discussion in an increasingly factious national environment.

On November 12 of that same year, with the support of Plattsburgh State’s International Relations Club and the campus branch of the Student Education Association of New York State, Students for a Democratic Society organized a highly anticipated first teach-in to be held in the College Union.  Hundreds of people, from both on and off campus, attended the lively inaugural event.

"We Care too Much"

After a year of studies at Plattsburgh State, Ms. Noonan relocated to New York City where she attended the New School for Social Research and joined the Workers League.  She remained committed to social justice and socialist ideals throughout her life.

Once Dr. Angell had opened the proceedings, the speakers animatedly presented their respective arguments.

Ms. Noonan was the only woman on the panel.  Her rousing speech expounding on the unconstitutionality and immorality of the war, as well as her response to the criticism of antiwar activists as unpatriotic, was met with thunderous applause.

Passions ran high throughout the evening and while the atmosphere remained as cordial as could be expected, exchanges eventually became more heated, especially as the floor was opened to questions from the college community and the public.  Certain audience members accused Chris Koch of disparaging the Air Force, and when a discussion of a recent flag burning became tense, the moderator, Dr. Eugene Link (social sciences), was forced to intervene.

Years later, in a 2012 interview with Thanh Niên News, Mr. Koch remembered his experience at Plattsburgh, stating that he had been forced to surreptitiously exit the building as he was being shouted at by audience members.

In addition, Big Stink lamented that the evening

…turned into a trial where the SDS members were indicted of being “traitors,” “communists,” and anything else the mob of some seven hundred packed into the College Union could have thought of that night…

While opinions about the efficacy of the event varied, the format did continue to be used as a way of prioritizing intellectual examination as an integral part of the antiwar platform. 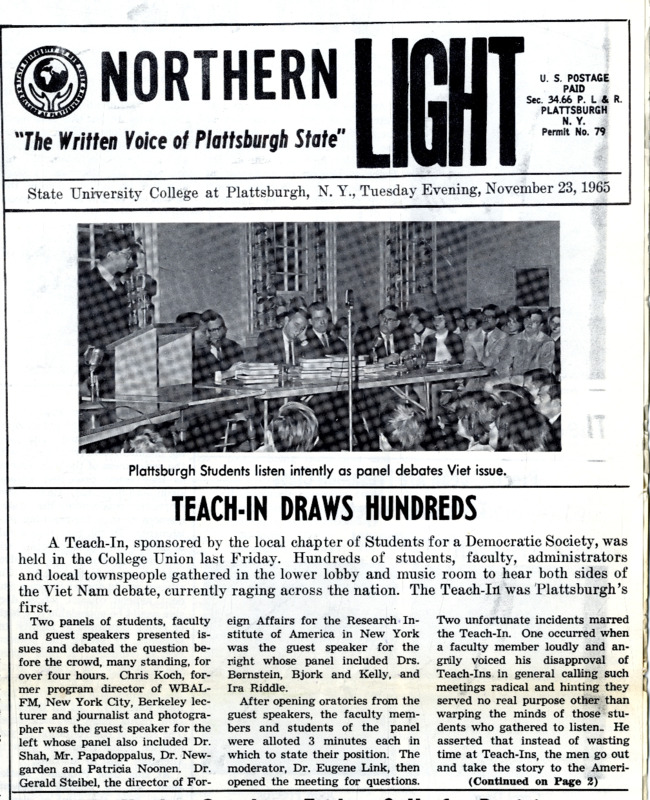 Extensive coverage of the groundbreaking event in Northern Light.  November 23, 1965.