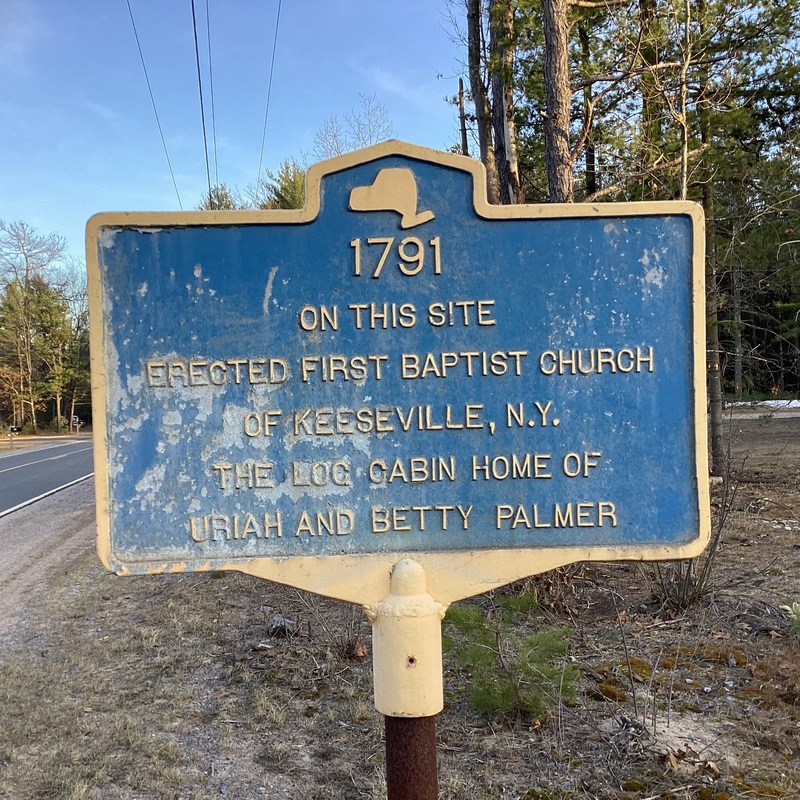 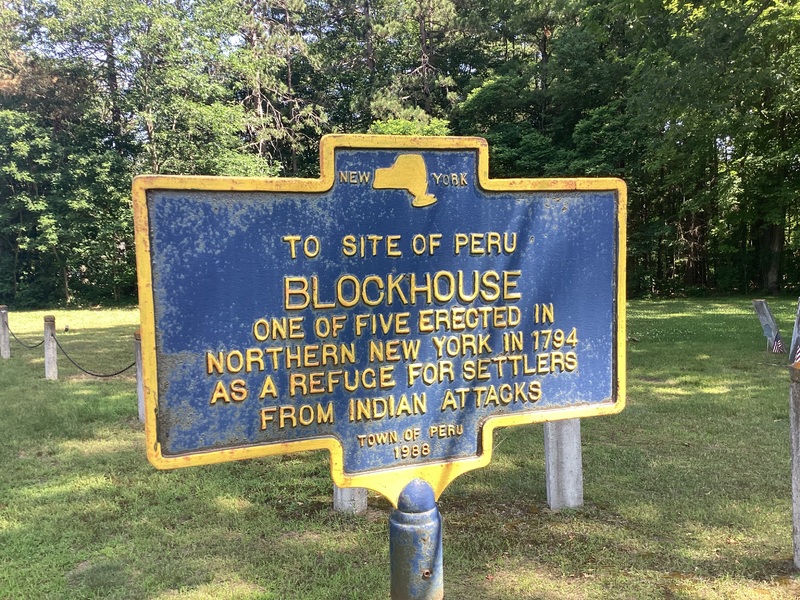 New York State marker for the site of Peru Blockhouse on Bear Swamp Road, Peru, Clinton Co. N.Y. Bear Swamp Road was improved by the Town of Peru with the assistance of the Works Progress Administration 1936.

A blockhouse was a rude sort of log-made fort used in the Revolution and before. 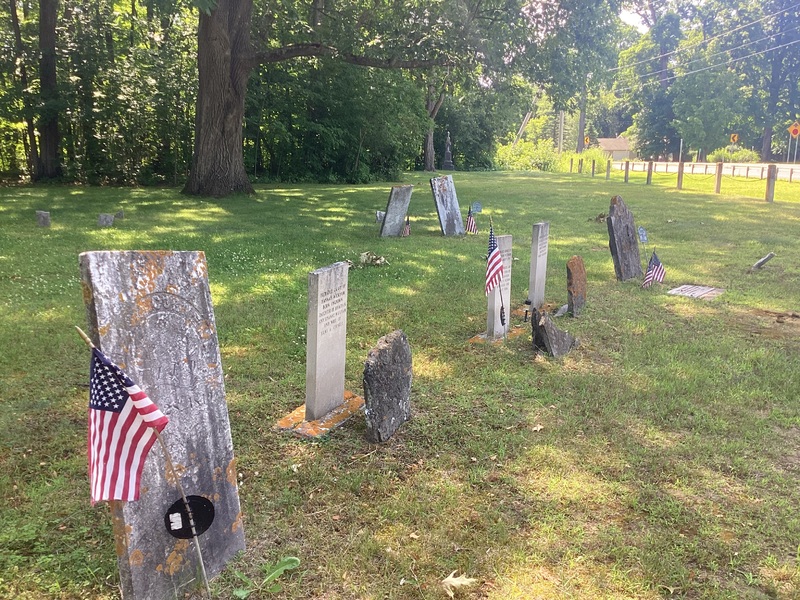 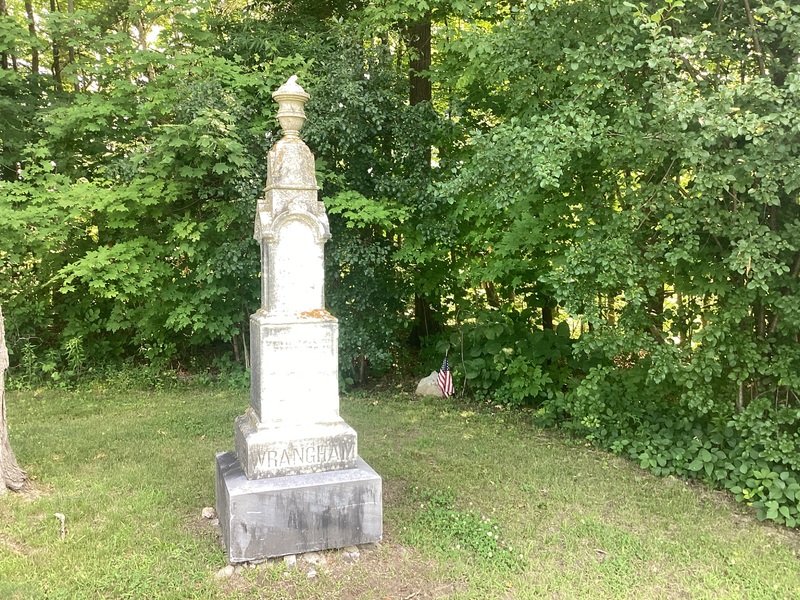 It is believed that  Sgt. Thomas J. Wrangham (1835-1893) in his occupation as marble cutter, created the Wrangham Monument in honor of his family which stands in the Blockhouse Cemetery in Peru, Clinton County, New York. Many of the dates on the stone were probably recalled from his memory and not always accurate, but a wonderful tribute to their memory.

For more than a quarter of a century of the Church's existence, the meetings were held sometimes in Peru Village, sometimes at Uriah Palmer's, sometimes at Adgate's Falls (Birmingham), sometimes here on the hill at Keeseville. This was done probably to accommodate the people what were scattered over so wide a stretch of territory.

It may interest some of you to know that one of their principal places of meeting was the old yellow octagon schoolhouse on the hill (French Catholic). Mr. Ebenezer Mott, who came from Crown Point to serve the church,  was ordained in that schoolhouse in March 1826, and closed his labours with them on January of the year following on account of poor health and very soon after went to his reward.

I am out of the habit of writing for newspapers and should not now undertake it if my subject was not one in which I have long been interested. I am lately informed that the old cemetery near the farm and home of the Everett sisters in Peru is being cleared of trees and bushes by the Supt. Of Highways and that the town is authorized by the State Historian to expend $100 per year if necessary to keep it clear of brush.

The history of the blockhouse for which the burying ground is named dates back to 1792, so it is just about as old as the town which was taken from Plattsburgh in December of that year.

In November 1791, an Army of 2,000 under command of Gen. Arthur Sinclair was surprised, defeated, and annihilated by Indians led by Little Turtle, a famous chief. That battle was fought in western Ohio on a branch of the Wabash River. The news of the disaster caused great alarm throughout the country and the Legislature of New York voted for the erection of four blockhouses for places of refuge for the people in the northern part of the state if they were attacked by Indians. One was in the town of Thurman in Washington, now Warren County, one in Willsborough, now Essex, then in Clinton, now Essex County, one in Peru and one in Plattsburgh.

The records kept in Albany say that the Peru blockhouse was built by Isaac French, but that name French is doubtless a mistake. There was an Isaac Finch with sons named John, Justice and James, who lived in that neighborhood and that Issac Finch with the help of those sons undoubtedly built the blockhouse. Neither of those four blockhouses was ever needed for the purpose for which it was built, but those in Essex and Plattsburgh served their counties as courthouses before the present courthouses were erected.

The Peru blockhouse in its later years was a small-pox hospital. In the spring of 1811, within a few days of the time when the first copy of the Plattsburgh Republican was printed, a young man named Simeon Barber died of small-pox and was buried near that blockhouse.

A young woman named Phebe Underhill was present at his burial and many years after when she was Mrs. Hallock she told my father that while the grave was being filled, she stood by the old blockhouse.

In the fall of 1860, when I was a thirteen-year-old boy, my father took me into the old cemetery, found the grave of Simeon Barber, and showed me the spot where the blockhouse must have stood.

Twenty-five or thirty years after, when I was writing a sketch of the life of Capt. David Cochran who led the Peru Militia at the Battle of Plattsburgh, I mentioned the fact he was buried in the blockhouse burying ground. Dr. George P. Bixby, editor of the Republican, wrote asking me to tell what I knew of the location of the blockhouse and I wrote an article stating the above facts. After the death of Dr. Bixby, his files of the Republican were sent to Albany where they are kept in the State Education Building.

A few years ago, Mr. Henry Harmon Noble went there and found my article and sent me a photographic copy of it and also a copy of the record which shows who built the four blockhouses and what each of them cost the state.

I deposited these documents into the Peru Free Library where they can doubtless be seen by anyone interested in the subject.

The grave of Isaac Finch, the man who built the blockhouse, is marked by a marble headstone and there are others thus marked, but too many have no inscriptions to tell whose they are. Captain David Cochran has none that I have been able to find, but his son-in-law James Reed has one and the grave of Captain Cochran may be near it.