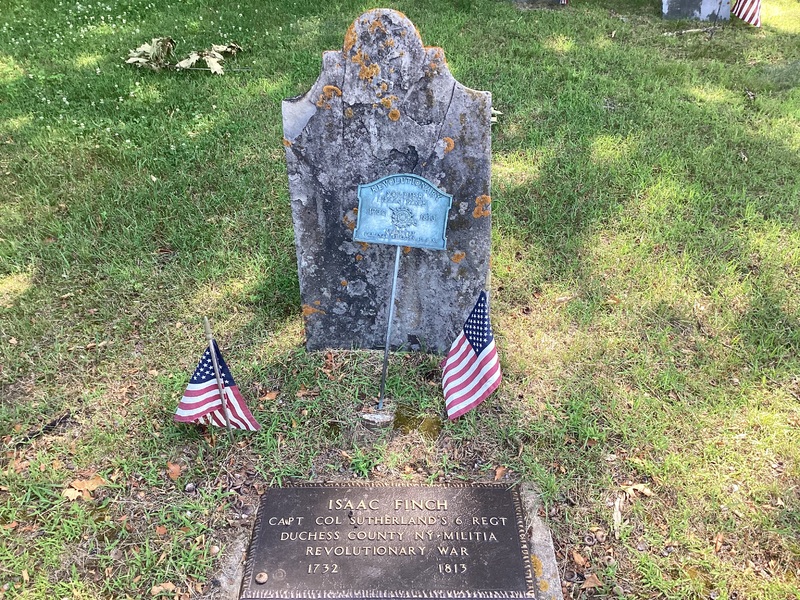 The grave of Capt. Isaac Finch in the Blockhouse Cemetery, Peru, Clinton Co. N.Y. He was Founder and an Elder of the First Baptist Church of Christ of Peru. 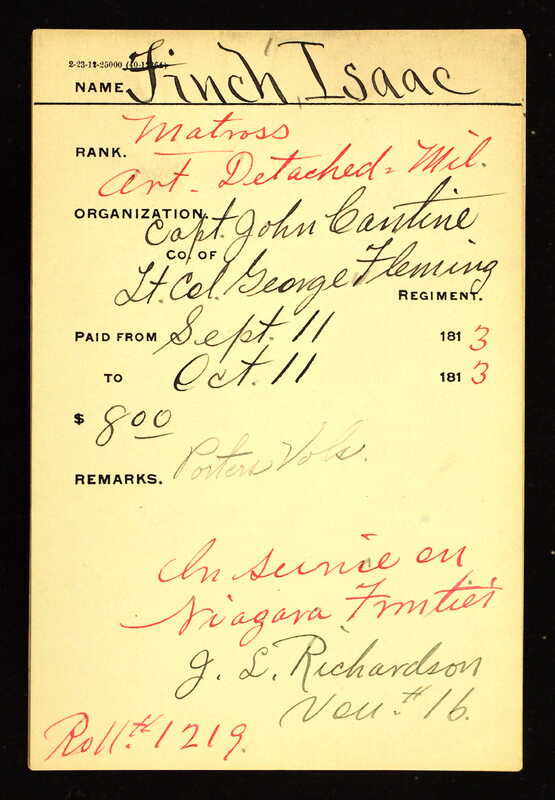 Capt. Isaac Finch served in the millitary during the Revolutionary War. 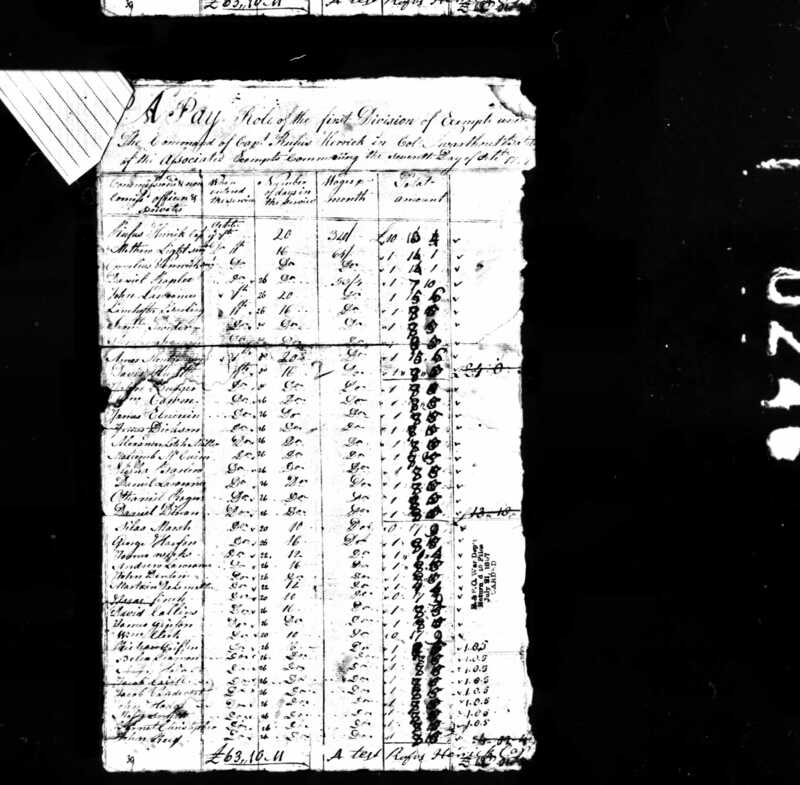 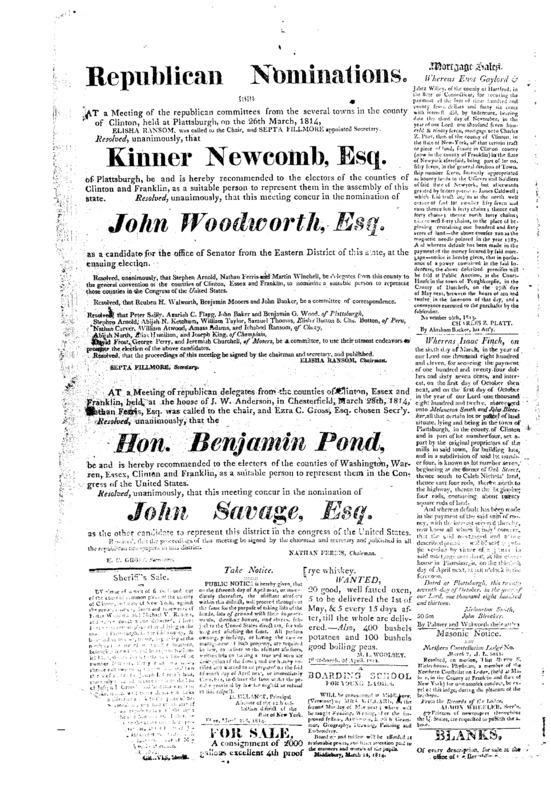 Capt. Issac Finch mortgage with Col. Melancton Smith and John Bleecker.  The son of Plattsburgh Proprietor Melancton Smith Sr., Col. Melancton commanded Fort Moreau during the Battle of Plattsburgh. He was the founder and first editor of The Republican newspaper in Plalttsburgh. As a result of his father's death, the first casualty during the 1798 Yellow Fever Epedemic, Smith inherited slaves including Mariah Haynes, who enslaves as well as her subsequent children, Sir. George Prevost and Caroline, with freeborn barber, Thomas Haynes. When Smith died in 1818, his widow, his second wife, Anna Green of Quaker stock, granted Mariah and her children their freedom. Smith is buried with other family members in a plot in Riverside Cemetery in Plattsburgh.

John N. Bleecker was born in August 1739, the son of Nicholas Bleecker Jr., an Albany businessman, and Margarita Roseboom Bleecker. The family's business interests and extensive landholdings eventually passed to him.

Bleecker served in the military during the Revolutionary War, where he was involved in the removal of cannon and supplies from Fort Ticonderoga. He later became assistant deputy commissary general of stores and provisions in the New York Department during the war. After the war, he was actively involved in Albany city and county government serving as city and county treasurer, clerk of the board of supervisors and member of the Committee of Correspondence. 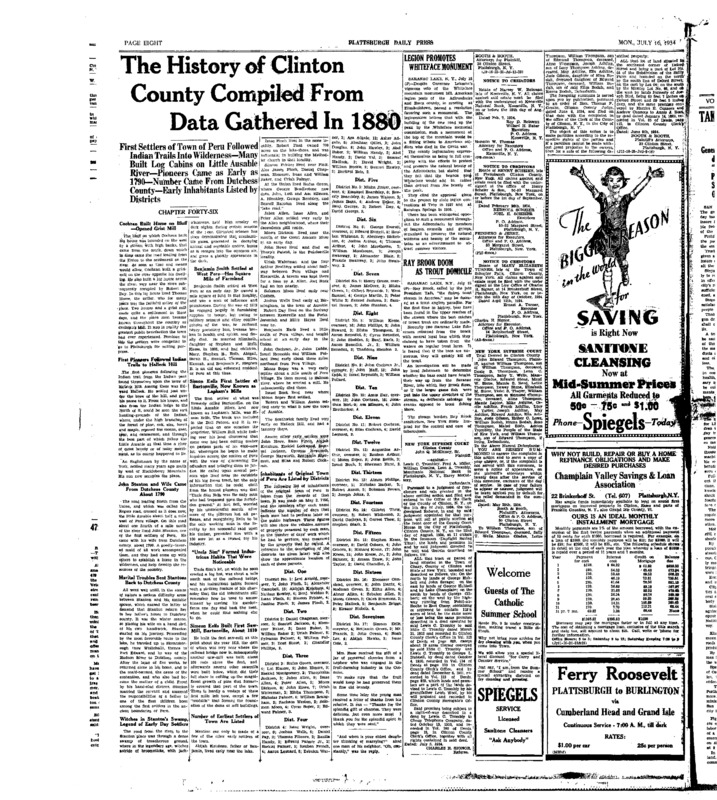 The History of Clinton County Compiled From Data Gathered In 1880 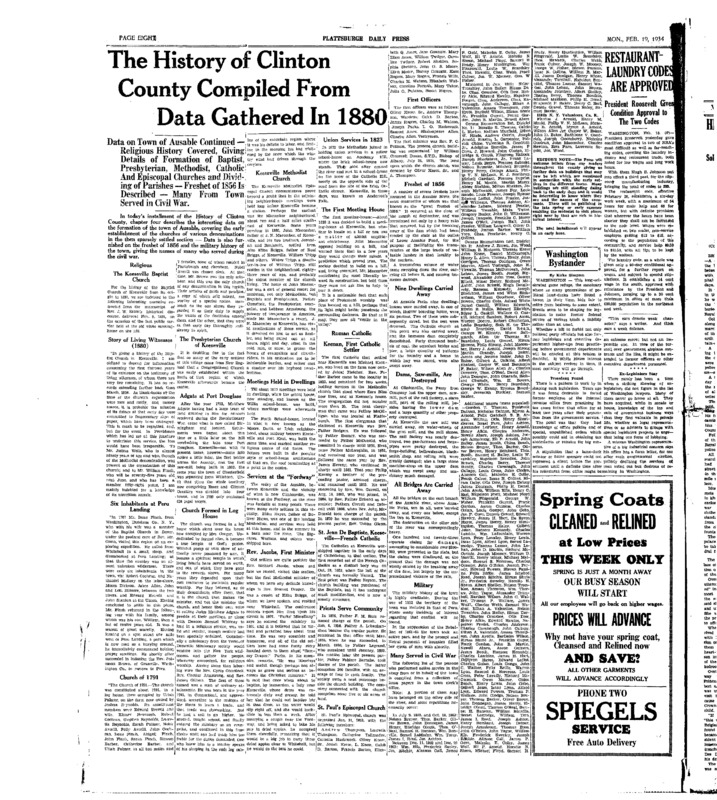 The History of Clinton County Compiled From Data Gathered In 1880

Capt. Isaac Finch’s accomplishment as the Founding Father of the oldest faith community on the West Bank of Lake Champlain is almost obliterated from the historical record much like the indecipherable script on his mottled marble tombstone in the Blockhouse Cemetery on Bear Swamp Road in Peru, Clinton County, N.Y.

His sheer determination, strong faith and leadership ability to attract like-minded people birthed the Baptist Church of Christ of Peru, N.Y., which became the First Baptist Church of Keeseville, NY 1788-1968.

The church’s 19th century edifice still stands on Liberty Street and is a testimony in the 21st century to the grit and enduring legacy of the God-minded Revolutionary War Patriot and the Charter Congregation, who built a Church when the Adirondacks were truly wild.

The Finch family’s origins are in Connecticut.

Capt Isaac Finch was the seventh inhabitant of Peru.

“In 1787, Mr. Isaac Finch from Washington, Dutchess Co., N.Y., who with his wife was a member of the Baptist Church in Dover, under the pastoral care of Rev. Mr. Gano, visited this region on an exploring expedition.

He sailed from Whitehall in a small sloop, and disembarked at Peru Landing, at that time the country was almost unbroken wilderness.

There were only six inhabitants in the town, viz: Robert Cochran and Nathanial Mallory on the lakeshore, Jabez Allen, John and Lott Elmore, between the two rivers, and Edward Everett and John Stanton at the Union.

Having concluded to settle in this place, Mr. Finch returned in the following year with his family, among whom was his son, William, then a lad of 12 years old. It was a season of great scarcity.

Having located on a spot one mile west of Peru Landing, a part which is now used as a burying ground, he immediately commenced holding prayer meetings. He shortly after succeed in inducing the Rev. Solomon Brown, of Granville, Washington Co., to remove to Peru.”

Source: The History of Clinton County Compiled From Data Gathered In 1880: Data on Town of Ausable Continued —- Religious History Covered, Giving Details of Formation of Baptist, Presbyterian, Methodist, Catholic And Episcopal Churches and Dividing of Parishes — Freshet of 1856 Is Described — Many From Town Served in Civil War,” Plattsburgh Daily Press, Monday, February 19, 1934, Page 8.

Peru Landing is a hamlet on the lake shore north of the mouth of the Ausable River.

Earls and Sherman Early Teachers In First School at the "Union"

Benjamin Earls and Benjamin Sherman taught early schools at the Union, where the first school in the town was established. The former was one of the first teachers " in the town, and charged a tuition' fee of $1.50 a quarter.

The Baptists in Old Peru by Eleanor A. Spaulding

In 1787, Mr. Isaac Finch and his wife of Washington, N.Y. visited this region on an exploratory expedition.

Sailing from Whitehall, N.Y. in a small sloop, they embarked at Peru Landing,  (a) Allen Bay on Lake Champlain.

At that time the country was an unbroken wilderness, with only six inhabitants in the town of Old Peru.

A year later Mr. Finch and his wife and young son, William, returned to settle in the country.

Their log cabin, as near as can be ascertained was on the site of the present home of Dr. Robert L. Miles, on Allen Street opposite the Blockhouse Cemetery.

They had no sooner settled and then they began to hold regular prayer meetings in the homes of the settlers. One of the families whose name has come down through the 188 years is the Jabez Allen.

Paul Allen (1976) who owns and lives on the old homestead is a direct descendant. The daughter of Jabez Allen married Uriah Palmer. It was in their log cabin home on Fuller St. in 1791 that the First Baptist Church of Keeseville was constituted.

(b) There is a wooden marker on the site which is inscribed as follows: 011 this site in 1791 We First Baptist Church of Keeseville was constituted in the home of Uriah and Betsy Allen Palmer. It was then called the Church of Christ.

Thus was constituted the oldest religious society on the west bank of Lake Champlain. The Quakers followed in 1789.

This farm was owned by Lloyd Fuller of Peru. The foundation of the cabin may still be seen.

Within a few years under the leadership of Isaac Finch, Rev. Solomon Brown was called as pastor.

He cane from Granville, N.Y. to settle in their town. Rev. Brown "planted” six-Baptist Churches in the area.

The only one of the original six remaining is the Jay, NY. Baptist Church. The others are gone or for the most part have united with the present United Methodist Church. These churches were American Baptist.

In short time after Rev. Brown settled here, the Baptists gave him a 50-acre farm.

(c) That farm was at the corner of Bear Swamp Road and Telegraph St. An old well on that corner was on the farm. The land is now owned by Dr. Driss Hassam.

Isaac Finch was active in local affairs. He helped build the Blockhouse in 1792 which stood on the site of the present Blockhouse Cemetery. Mr. Finch is buried there and his grave is marked by a 1'D.A.R." marker. (a) Peru Landing - See map dated 1856 on Allen Bay since 1788.

It is opposite the home of Gerd Kienart. (b) See History of the Town of AuSable - Hurd's History of Clinton and Franklin Counties. (c) Brown Farm - See Map of 1856. It is designated as J. Rider. Information given by the late Mary Rider Mac. Eleanor A. Spaulding March 10, 1976

At that time, the record reads, ‘the numbers after each name indicates the number of days that each man had to perform labor on public highways.’ After his name is an ‘8’ which would indicate considerable acreage. His deed is recorded in Clinton County Clerk’s Office. This is not the same Issac Finch of Jay as the dates do not coincide.