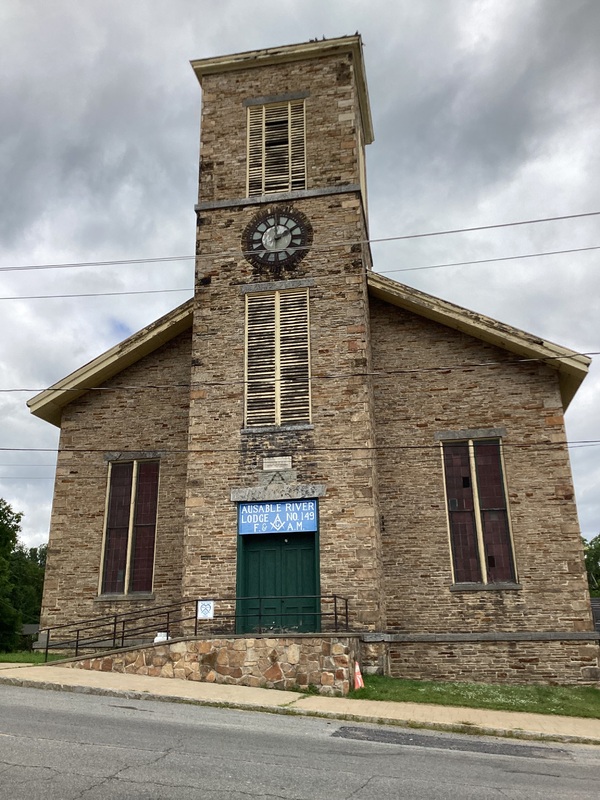 Located today inside the old First Congregational Church in Keeseville, the AuSable River Lodge #149 is chartered through the Grand Lodge of New York, AF&AM, which is recognized by the United Grand Lodge of England.

In the 19th century, the Ausable River Lodge No. 149 A.F. and A.M. was organized in March 1849. Source: History of Clinton and Franklin Counties, New York: With Illustrations and Biographical Sketches of its Prominent Men and Pioneers by Hurd, D. Hamilton (Duane Hamilton) 1n; p. 215, Lewis, J. W. & Co., Philadelphia 1880. www.archive.org 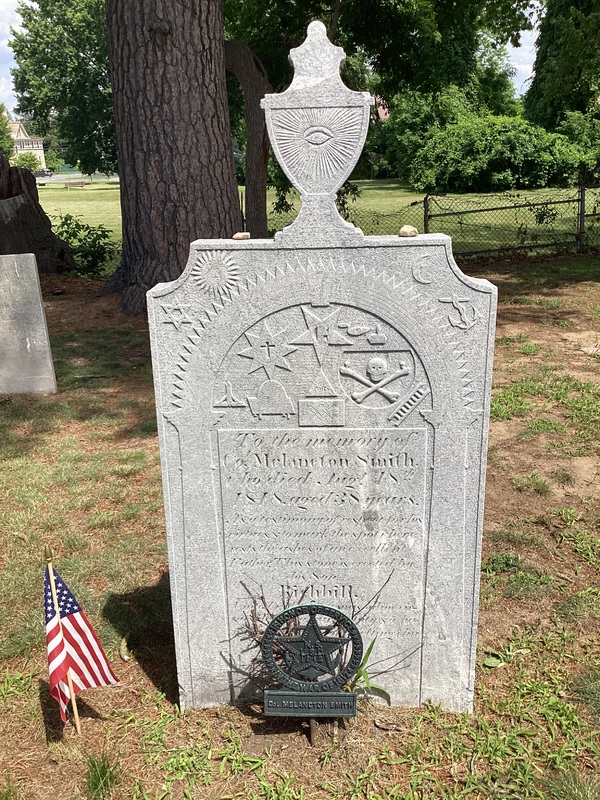 In Riverside Cemetery, old Masonic symbols cover the headstone of Col. Melancton Smith, who was the first Master of Clinton Lodge F. and A. M. in Plattsburgh.

Smith was the son of Plattsburgh Proprietor Melancton Smith Sr.

Col. Smith commanded Fort Moreau during the Battle of Plattsburgh and was the founder and first editor of The Republican newspaper in Plattsburgh.

The Charter is signed by John Wells, Grand Secretary of the State of New York, and sealed with the Grand Lodge Seal.

The order flourished and prospered in the village until the Morgan excitement, when the lodge ceased to meet, shortly after which it surrendered its charter.

When the Anti-Masonic Movement wrecked havoc in churches across the United States, the Church was torn asunder with ministers and members leaving.

It was many years before complete healing and reconciliation occurred and united the Church body.

Anti-Masonic Movement, in the history of the United States, popular movement based on public indignation at and suspicion of the secret fraternal order known as the Masons, or Freemasons. Opponents of this society seized upon the uproar to create the Anti-Masonic Party. It was the first American third party, the first political party to hold a national nominating convention, and the first to offer the electorate a platform of party principles.

The movement was ignited in 1826 by the mysterious disappearance of William Morgan, a bricklayer in western New York who supposedly had broken his vow of secrecy as a Freemason by preparing a book revealing the organization’s secrets. When no trace of Morgan could be discovered, rumours of his murder at the hands of Masons swept through New York and then into New England and the Mid-Atlantic states.

Wirt won only the state of Vermont (seven electoral votes) in the 1832 election, and the party went into decline after that. By the late 1830s much of its reform impulse had been taken over by antislavery agitation, and most of its politicians had joined the newly formed Whig Party.

In November, 1833, the Church gave Mr. Robert Brisbane, of Fabius, N.Y., an invitation to settle with them. Though not a systematic preacher, he was a fluent and captivating speaker. In July, 1834, a council sat to ordain him; but on reexamining him they refused to proceed to do the work for which they had been called.

In consequence of difficulties growing out of the Anti-Masonic movement in 1829 and 1830, and the attempt to settle Mr. Brisbane, the Church in March, 1835, invited Rev. Henry Green, of Cornwall, Vt., to spend the ensuing summer with them. He was an able preacher and a great peacemaker. He immediately commenced his labors, and such was his success that harmony was soon restored.

Our other historian writes of Mr. Sawyer, Nov. 29, 1828, Mr. Conant Sawyer, then a young man commenced preaching among them. His labors were very acceptable. He was ordained as an evangelist at his own request, Dec. 30, 1829. In the following year, there was a powerful revival of religion. In the midst of this glorious work of grace, the anti-Masonic difficulty raged speedily terminating a connection which promised to be long and useful. He closed his labors Oct. 30, 1830. (LAB).

Very soon after the arrival of Mr. Sawyer, the Minute Book records trouble within the Church concerning the Anti-Masonic movement.

January 31, 1829: A complaint was brought by Isaac Lake against Horace Beach for belonging and upholding a secret speculative Free Mason institution which Laws and regulations are contrary to the Laws of the Gospel.

June 27th, 1829: There is a story concerning Nathan Wardner as having visited on the Sabbath with one Mr. Balloons on the subject of Masonry.

Under date of Nov. 28, 1829 are these excerpts," Church took up difficulties with Bro. Wardner and Bro. Isaac Lake and Brother Lake "threw in his complaint against Brother Beach." Horace Beach had not been censored. Brother Lake also added, "that he had no fellowship with any brethren who belonged to the Masons and any member of the Church who did refuse to investigate the subject of speculative free masonry, to such I would say, I have no fellowship."

Later comes the trouble between Norman Rowe and William Taylor, 2nd, which lasted so long in the Church.

The Masonic trouble continued for three years, but the trouble with William Taylor was not settled until 1851.

The Brookfield Church took in the Wardners and the Lakes.

The Minute Book records his request Oct. 30, 1830 "For himself and wife, which was granted."

It will be noted that the Church was divided in their opinion concerning the resignation of Mr. Sawyer, and he himself felt that he had been hasty. The result is recorded later.

The Church was without a pastor for nearly a year following the resignation of Elder Conant Sawyer. The next pastor called and who accepted was Rev. Robert Bryant of Philadelphia, Pa.

Our historian Lucy Ann Baber writes of the calling of Robert Bryant.

In May 1831, Robert Bryant, an Englishman, and a member of the Fifth Baptist Church in Philadelphia, by invitation of Deacon William Taylor who was begging for funds at the time to liquidate the debt on the Meeting House, visited Keeseville.

On his return home, he was ordained in Philadelphia by the request of the brethren in this place. He entered upon his duties early in July. His ministry, considering its brevity, ws the most succesful of all that proceeded him.

At the expiration of a year and eight months, he resigned his charge. He left for the same reason that Mr. Sawyer did.

Our other historian writes of the same period. (UK).

We now come to a period in the history of the Church which it were well to blot out of our records altogether. The Keeseville Church, in common with nearly every other church in the Country, was almost ruined by the Anti-Masonic agitation. Partisan strife found its way into the churches, completely wiping some out of existence.

The Keeseville Church survived the conflict but it was with bruises and scars that remained for many a day. Conant Sawyer left when the Anti-Masonic strife was at its height. His successor, a Mr. Bryant, after a brief ministry of 20 months, resigned for the same reason.

Sources: History of Clinton and Franklin Counties, New York: With Illustrations and Biographical Sketches of its Prominent Men and Pioneers by Hurd, D. Hamilton (Duane Hamilton) 1n; p. 215, Lewis, J. W. & Co., Philadelphia 1880. www.archive.org; A History of the First Baptist Church of Keeseville, N.Y. 1788-1968, Eleanor A. Spaulding, Under the Auspices of the Baptist Ladies Guild, January 1, 1959.
Prev Next