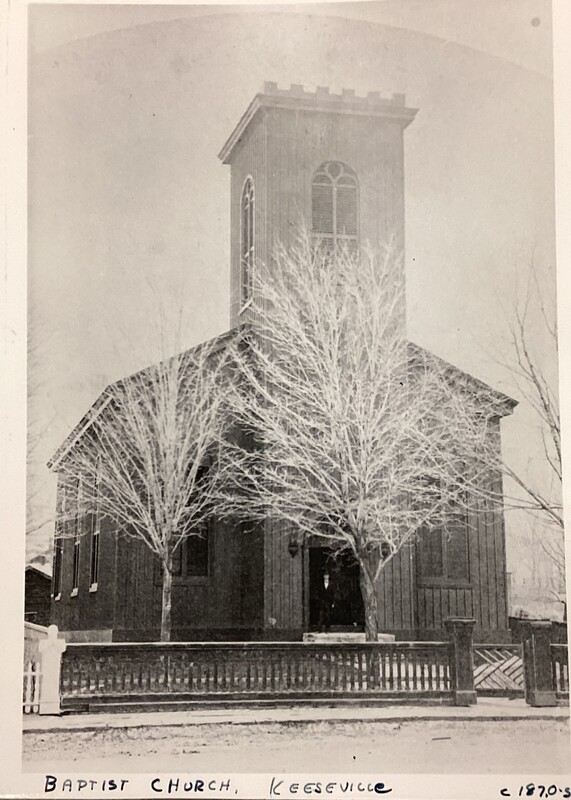 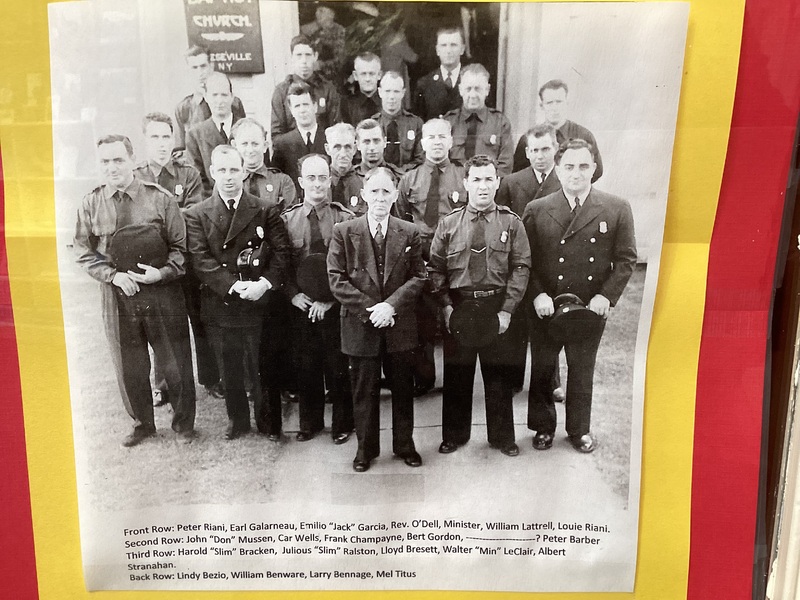 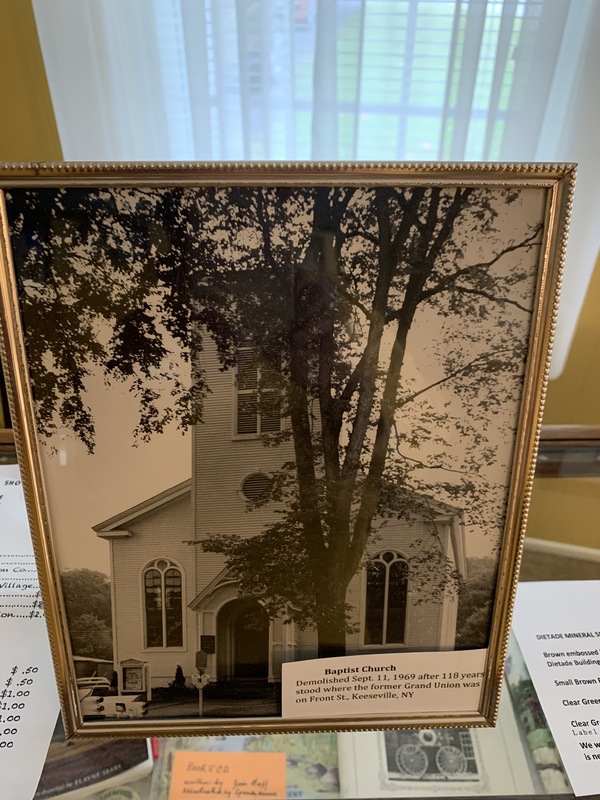 The new First Baptist Church of Keeseville was designed by architects T. Thomas and Son, New York City, and built by  Seneca Perry, James and Benjamin Mills and Norman Whitney in 1851. 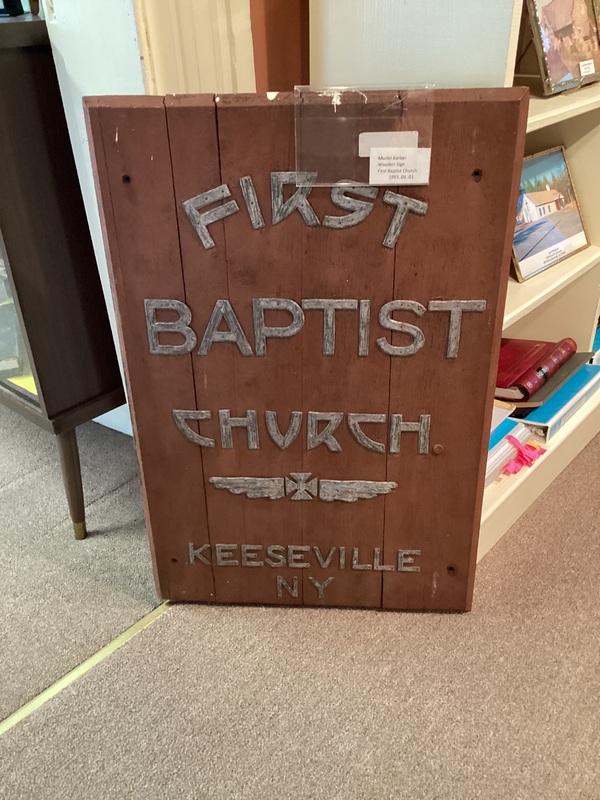 Bespoke sign that graced the front of the First Baptist Church of Keeseville on Front Street.

The First Baptist Church of Keeseville's rebirth on Front Street boded a renewal of a forward-looking congregation downtown and a leave taking of the old church structure on the hill and the dissension of the past that threatened its very survival.

Church met for business. (A real interesting one).

8th. A proposition was made, whether it might be advisable to sell our meeting house to the Trustees of the Academy on condition that they build us another in the village – Appointed a committee to make the necessary inquiry respecting said proposition viz., J.D. Kingsland, J.P. Whaling, Wendall Lansing and said com. inquire what our Parsonage could be sold for.”

Source: The History of the First Baptist Church of Keeseville, N.Y. 1788-1968 by Eleanor A. Spaulding, Church Historian, under the Auspices of the Baptist Ladies Guild, January 1, 1959.

This edifice erected by Keeseville Baptist Society in the year 1851.

Formed house of worship erected and Society formed in 1826.

Edmund Kingsland, Jacob D. Kingsland, Wm. W. Kingsland, Alfred Baber of Keeseville, and Edmund K. Bussing, John S. Bussing of New York under the name of and firm of Kingsland Baber & Co., were selling all kinds of goods in the brick store on Front Street directly across from the Baptist Church. The listed contributors donated over for the building of the church.

The builder, Seneca Perry, mentioned previously lived in the house on Vine Street where I (Maurice Turner) live today. Mr. Perry probably built it for his own home. James Mills lived in John Calkins home on the corner of Vine and Clinton Streets. These houses were side by side.

The Church commenced worship in the vestry of their meeting house. The pastor preached a dedication sermon from Exodus 20:24 “An Altar of earth thou shalt made unto me … all places where I record my name I will come unto thee, and I will bless thee.”

From the history of the Baptist Church printed in the Minutes of the Association for the year 1852, it states that “on the 13th of November, the Church commenced worship in the vestry of their new house.”

The dedication services seemingly was not dedicated until the church was completed Jan. 14th 1852, the new Meeting house was this day dedicated to God, sermon by the pastor.

Our historians write of the new edifice: “Measures were taken for the erection of a more centrally located home of worship. In all, Mr. Baber’s clear head, tender heart, and strong hand was manifest. Plans and specifications by a New York architect was submitted, accepted and the new house went up. It was a model of convenience and comfort, and seemingly perfect acoustic properties, any speaker could desire. Artists from Boston frescoed the walls. It was a thing of grace and beauty from the cultured taste and practical knowledge of Mr. Baber. (UK).

From the Association Minute Book of 1862, there is further information concerning the new building: “It was supplied with a baptistry and the arrangements throughout were pleasant and convenient. In the notes that LAB added to the history, is “The original cost of our present house of worship was seven thousand dollars. Organ was one thousand.” James Pilling, Esq.

As has been written, there is nothing in the records to record the exact date of the acquiring of the organ. Our only record is on a silver plate over the organ on which is inscribed, “Gift of James Pilling, October 1857.” (60).

Our UK author writes concerning the organ, “The organ gift of Mr. James Pilling (In pencil) “A warm friend of the church,” and who is represented here today in the person of his daughter, Mrs. Baker of Port Jackson.

This was a Tracker organ and was one of the best pipe organs made in this country. A silver plate was over the keyboard which read, “Given by James Pilling, 1857.” The organ was given to Bennington College, Vermont 2nd Sept. 1968, it was taken out of the church.

The Pilling family once lived where the “Adgate Home” is now, and owned the “Banks of the AuSable Chasm.”

Our record book gives that the first (Essex & Champlain) Association meeting was in Eben Conant’s barn, one mile from Peru in 1805. Although in the history of the first fifty years of the Association, it was given as being held in Elizabethtown, May 30, 1804. The barn in Peru stood on the Haff Farm now owned by John Neyenhouse on Union Road.

Families of the Church visited the sites where the Baptists had held meetings in 1788. A marker was dedicated on the site of the home of Uriah and Betsy Allen Palmer. The marker was lettered by Rev. LaWall. They also visited the grave of Isaac Finch who held the first Baptist meetings on the Lake Shore, in the Block House Cemetery.

Source: The History of the First Baptist Church of Keeseville, N.Y. 1788-1968 by Eleanor A. Spaulding, Church Historian, under the Auspices of the Baptist Ladies Guild, January 1, 1959.
Prev Next