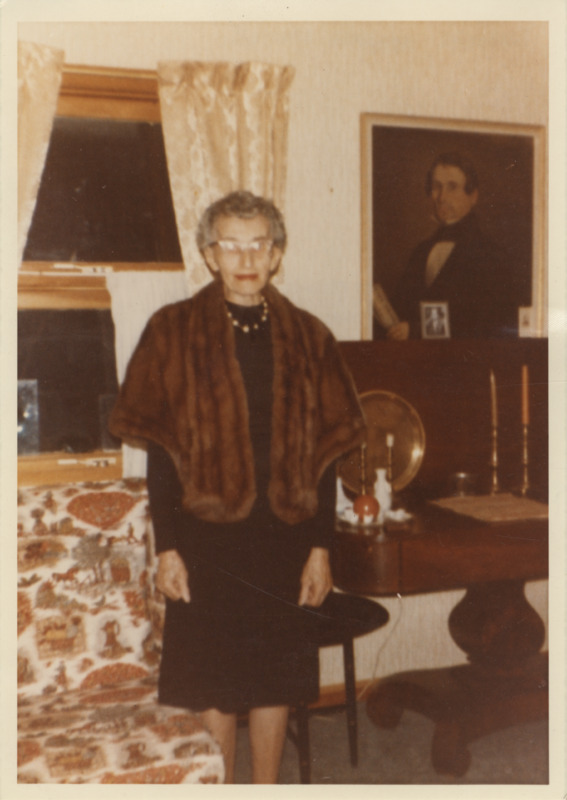 Marjorie Lansing  Porter poses in front of a portrait of her great-grandfather, Wendell Lansing, founder of the Essex County Republican and a documented Abolitionist and Underground Railroad Conductor in the Adirondacks. 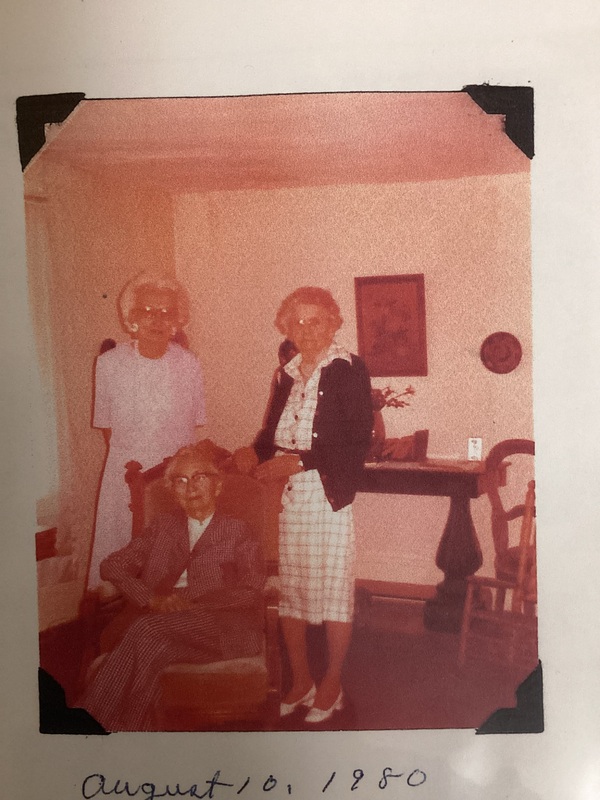 Eleanor Arthur Spaulding, author of A History of the First Baptist Church of Keeseville, N.Y. 1788 --- 1968

These ladies collected and edited and wrote the two volumes of Peru History, '"A Collection of Articles on Local History by J. Warren Harkness and Others." 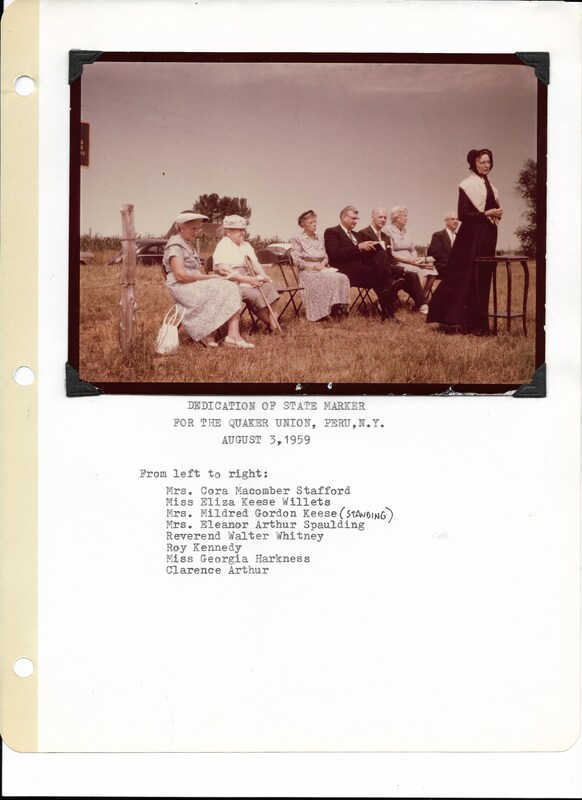 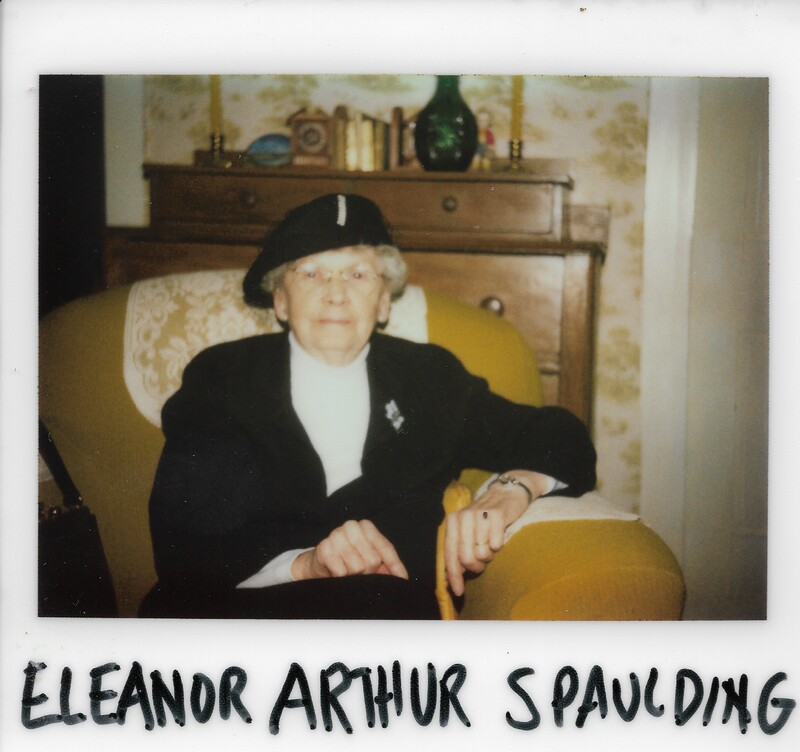 The Mother Church: The First Baptist Church of Keeseville, N.Y. 1788-1968 would not be possible without diligent documentation of the past by historians and writers, Marjorie Lansing Porter and Eleanor Arthur Spaulding.

This is a small tribute to them, their scholarship, and the recognition of their invaluable contributions to the historical and cultural legacy of the Adirondacks and Champlain Valley.

INK IN HER BLOOD

Marjorie Lansing Porter blazed trails and documented all things Adirondacks and Champlain Valley that remain a platinum mine to researchers in the 21st century. There are passages contained within The History of the Baptist Church of Keeseville 1788-1968 that were penned by Marjorie Lansing Porter, who frequented some of the same circles as Eleanor Arthur Spaulding such as the Clinton County Historical Association and the Quaker Union Society.

She graduated from the Plattsburgh Normal School in 1912 and for parts of her career she served as the historian for the city of Plattsburgh and both Essex and Clinton counties, N.Y., researching and writing prolifically about Champlain Valley/Adirondack history.

Mrs. Porter was the first Clinton County Historian, beginning in 1944 and serving until the end of 1952 and from January 1953 until July 1954. Mrs. Porter inherited and edited the Essex County Republican, the newspaper founded by her great grandfather, Wendell Lansing, in 1839.

The Lansing family also owned the Plattsburgh Sentinel, edited by her grandfather, Abram Lansing. She also for some time edited the North Countryman and Essex County News newspapers and with G. Glyndon Cole, the periodical, North Country Life/York State Tradition.

She was involved in the U.S. Work Progress Administration’s Federal Writers Project, for which she wrote her 1942 publication, History and Guide: Keeseville-Chesterfield-Ausable. She also collected historic artifacts in a barn in Green Lawn, later moved to her “Red Barn Museum,” which in 1955 became part of the new Adirondack History Center Museum in Elizabethtown (http://www.adkhistorycenter.org/).

Eleanor Arthur Spaulding was the First Baptist Church of Keeseville Historian in 1959, who was commissioned by the Baptist Ladies Guild to write the church's history, which is a wealth of knowledge not only about the oldest faith house on the west bank of Lake Champlain, but also offers a rare glimpse of the early settlers' challenges and resilience in Clinton and Essex counties.

There are three known iterations of this church history in existence: one at the Keeseville Free Library, one at Anderson Falls Heritage House Museum, and the third at the Peru Town Historian Office.

The Keeseville Free Library version is the one that can be accessed digitally on this digital exhibit's homepage.

Eleanor Arthur Spaulding was born in AuSable on February 9, 1892, the daughter of Leland and Alice (Buttriss) Arthur.

Mrs. Spaulding was a schoolteacher in Keeseville for many years  and taught 15 years at the Keeseville Central School.

An active historian, she did extensive research on the history of Clinton County and her Arthur forebears.

Mrs. Spaulding was the great-great granddaughter of Augustin Arthur, who with his three brothers -- Thomas, Joshua and Reuben -- were among the first non-Quaker founders of Peru in 1792.

About Thomas and Joshua, Mrs. Spaulding revealed in a Press-Republican interview, they went off to fight in the Battle of Plattsburgh and the War of 1812.

"They didn't have regiments that they had to stay with. They could fight for a while, and then come back home."

Mrs.  Spaulding entered the Plattsburgh Normal School in September 1914 and graduated in June 1916.

Her concentration was commercial (business).

In September 1916, she taught at Saranac District No. 2 school.

They were married by Rev. R. S. O'Dell, a pastor of the First Keeseville Baptist Church.

Leon worked 33 years for the Boston & Maine Railroad, and 15 of those years was as a ticket agent in Swampscott, Mass.

In 1932, the couple relocated to the Arthur Farm in Keeseville.

In December 1935, Mrs. Spaulding  presented "The Courtship of Miles Standish" with the assistance of Rose Pascal and Clinton Allen.

A year later, she was again elected lecturer at the Peru Grange.

Also in 1937, she was employed at the Post Office in Peru.

Mrs. Spaulding donned a 200-year-old satin gown for the centennial celebration of the R. Percy Keese House in July of 1938.

She portrayed a mother in "Lyric Time," a musical comedy.

In April 1943, she was in charge of the program for the Community Church Guild in Peru.

In 1944, Mrs. Spaulding taught on Long Island and returned home for the summer.

She taught on Fishers Island, which is a part of Southhold at the eastern end of Long Island Sound.

In September 1945, she was hired to teach commercial at Mineville.

Leon Spaulding tragically died following an operation in the Physicians Hospital on April 3, 1948.

He was buried in the Arthur Family plot at Evergreen Cemetery in Keeseville.

In September 1949, she was elected president of the Keeseville Central School Teachers Association.

Percy Keese and Mrs. Thew, still members of the Society of Friends, were elected as president and vice president. Mrs. Stafford was elected as secretary/treasurer.

The society's purpose was to restore and maintain the  burying ground and site of the first church of the area and to preserve the history of the Peru Friends. Mrs. Merritt Keese and Mrs. Spaulding made a list of 200 gravestones in script that time had erased.

A history of the Union is preserved in two volumes of articles by J. W. Harkness &  Others compiled by Grace Arnold, Eleanor Spaulding and Cora Stafford.

In April 1952, she hosted her mother Alice's  80th birthday celebration.

Mrs. Spaulding went on a month-long tour through New Hampshire with Miss Mary Fox in June of 1953.

The Arthur Family Reunion was held annually every summer.

In August 1954, she presented a history of "We Arthurs" at the annual event.

She was a chaperone for the junior prom for the Class of 1957 at Keeseville Central School. The theme was "Moonlight Serenade," and the court was Miss Carol Baker and William King .

Mrs. Spaulding exhibited a footstool from the First Baptist Church, the oldest church on the west bank of Lake Champlain, at the Clinton County Historical Association's "Exhibit Night" held at the Plattsburgh Public Library in June 1958.

Other exhibits included Mrs. Marjorie Lansing Porter's horsenails made at the Keeseville factory, Mrs. Fred Warren's sugar cutter and document freeing a slave of Zephanial Platt, a ruler made of wood from the Royal Savage and eight relics excavated from Fort Brown.

The program will consist of historical items from the History of the Keeseville Baptist Society, which Mrs. Spaulding recently compiled. 7:30 p.m. All ladies of the Church are urged to be present.

The Baptist Ladies Guild met at the residence of Mrs. Eleanor A. Spaulding.

Mrs. Eleanor Arthur Spaulding, a retired member of the faculty of Keeseville High School, was honored Tuesday evening, June 9, by the Baptist Ladies Guild of the First Baptist Church of Keeseville, at a regular meeting of the group held at Mrs. Spaulding's home.

Commissioned by the guild to write a history of the Keeseville Baptist Society a year ago, Mrs. Spaulding recently completed her research and writing. The work is being read by a reviww committee, prior to some sort of publication method.

For her devotion to this undertaking and her continued interest in the life of her church, Mrs. Richard Thompson presented Mrs. Spaulding with a beautiful certificate of appreciation mounted with a reproduction of the famous Sallman's Head of Christ painting. The certificate was signed by Mrs. Thompson as president of the guild and Mrs. Philip Baber as secretary.

She presented a church history at the  rededication of the First Baptist Church of Keeseville.

At the 174th Anniversary of First Baptist Church of Keeseville, Mrs. Spaulding presented a history of the church.

In March 1965, she was elected vice president of the Quaker Union Society.

At the February 1966 annual meeting of the First Baptist Church, she was elected historian.

In July 1974, she served on the Town of Ausable Bicentennial Committee with Mr. and Mrs. Kenneth Anderson, Bessie and Grace Arnold, Dr Philip Reines, Linda Bedeard and Ernest Harkness.

Mrs. Spaulding died at the age of 86 on Monday, October 24, 1988 at the CVPH Medical Center in Plattsburgh.

Burial followed in the Evergreen Cemetery with the Rev. Burke reciting committal prayer.