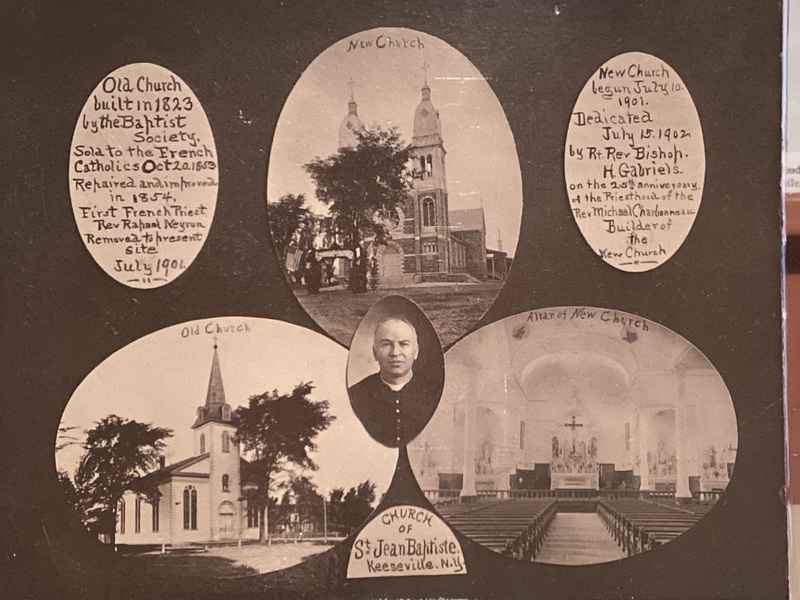 This Anderson Falls Heritage House Museum exhibit depicts the evolution of the First Baptist Church of Keeseville, N.Y. to the Church of St. John de Baptiste, to a Parish Hall. 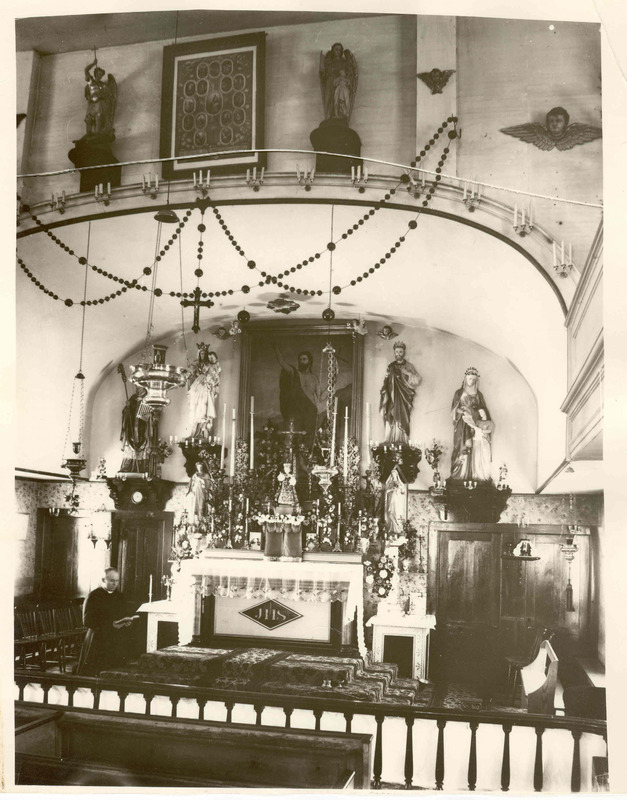 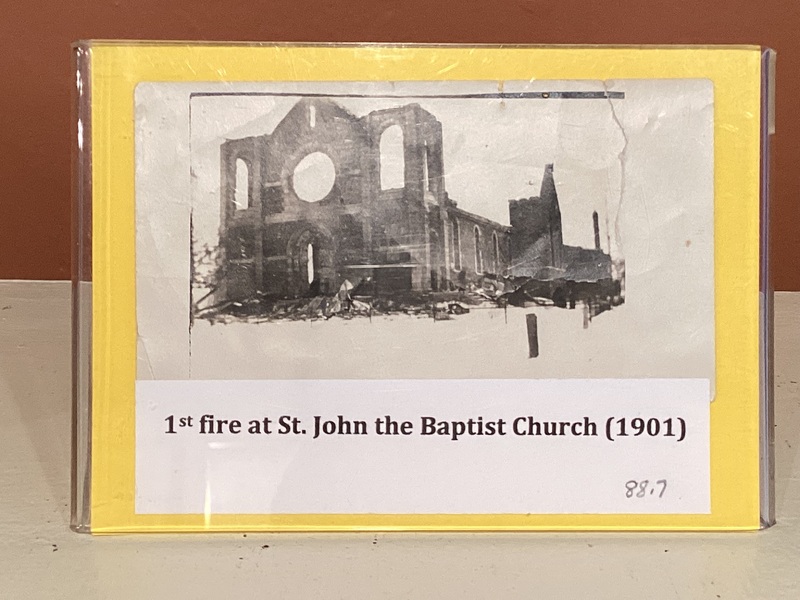 1901 Fire destroyed the first stone structure of the St. John de Baptiste Church. It was rebuilt in 1903, and it stands today at the intersection of Liberty Street and Main Streets in Keeseville. 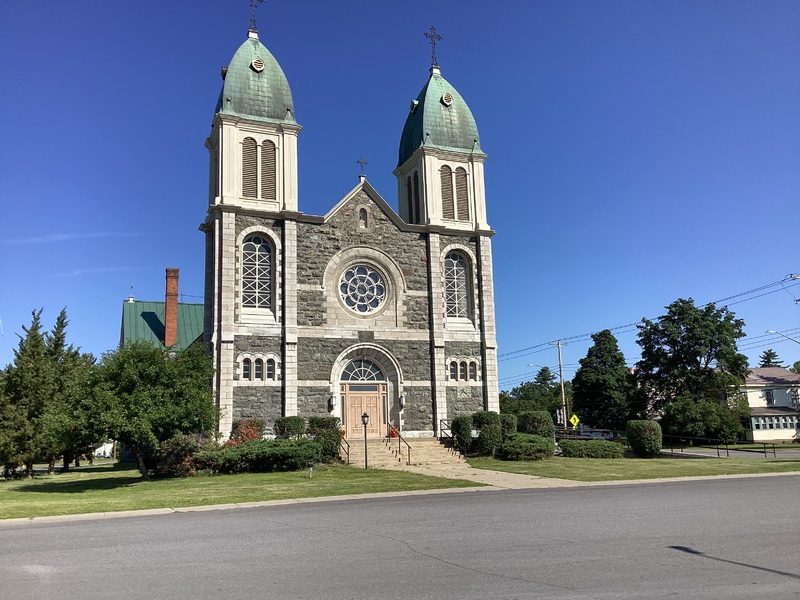 The second iteration of St. John the Baptist Church as it appears today as part of the Roman Catholic Community of Keeseville, which includes the Church of the Immaculate Conception on Front Street.

The churches are a part of the sprawling  Roman Catholic Diocese of Ogdensburg that celebrated its 150th Anniversary in 2022. 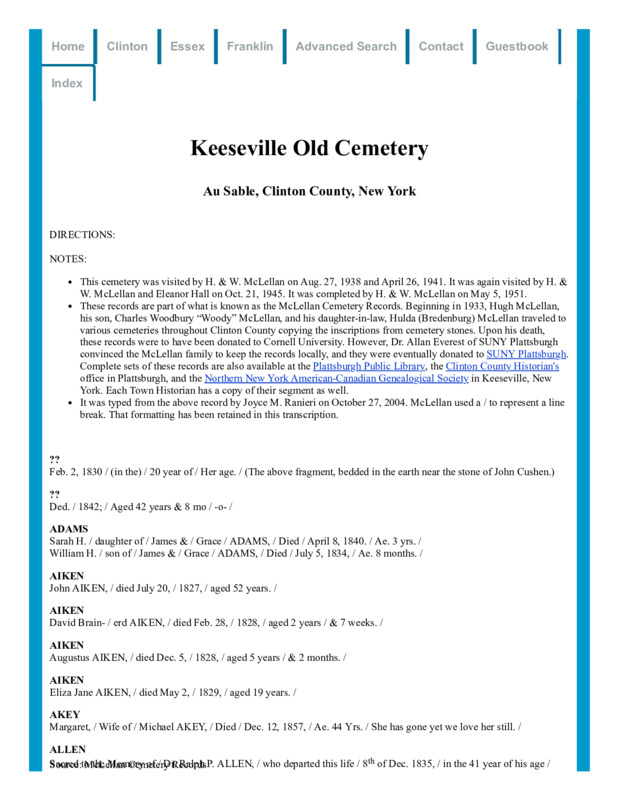 This cemetery contains burials of many white Protestant settlers and their descendants to the region. It can be accessed online at. www.nnytombstoneproject.net 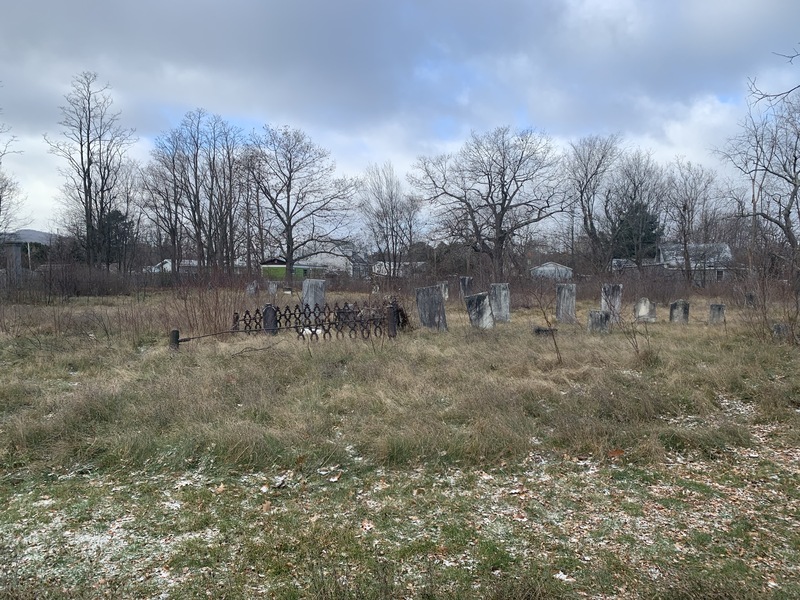 A spring view of the Keeseville Old Cemetery that is usually overgrown with poison ivy during summer months.

It is a miracle that the original structure of the First Baptist Church of Keeseville still exists.

When the Baptists abandoned it to erect a new worship place on Front Street, the French Catholics in the community seized the opportunity to establish their own faith house, St. John de Baptiste Church.

The Old Church became St. John's Hall, once a new stone edifice was built on the timber structure's original site at the top of the hill.

The Old Church is now residential property, in front of the Old Keeseville Cemetery, which is still called the derogatory "Nigger Cemetery" by some in the community.

The majority of the burials in the cemetery, which was not affiliated with the Church, are of white Protestants, who were  early settlers to the region and their descendants that bear familiar North Country names including Aiken, Allen, Beach, Carpenter, Church, Drown, Fuller, Moore, Pope, Prescott,  Sherman, and Weston.

In the Minutes of the Association for the year September, 1872 there is an obituary for Rev. John Adams Dodge (father of Daniel).

Quote - "For more than twenty years, he has been an esteemed citizen of Keeseville, and within  that Baptist and other places of worship his voice has often been heard.

It may be worthy of note that he preached the first and last Protestant sermon in the Old Baptist Church on the hill in this place."

This last statement does not quite coincide with our records, but is safe to assume, that he had a part in it."

Under the title "Reminiscences" in  "Old Keeseville Tales," written by Myron D. Fuller (54), who was one of the "boys" going from this Church into the ministry, is a story about Elder Dodge, and he is often mentioned as Father Dodge, "I never read I Corinthians 15:40 without calling to mind Elder Dodge, who stood before the people one Sunday in cold weather with a buffalo overcoat on, and poured out the truth from these words, coming as they did from one of God's veterans on the borders of the grave, like an echo from the past, that we might trust for the future."

The church this day abandoned the meeting house on the hill in which they had worshiped many years. The pastor preached an historical sermon from Deuteronomy 8:2 " And thou shalt remember all the way which the Lord  thy God led thee."

Source: The History of the First Baptist Church of Keeseville, N.Y. 1788-1968 by Eleanor A. Spaulding, Church Historian, under the Auspices of the Baptist Ladies Guild, January 1, 1959.

The old building was sold to the St. John de Baptiste Society in 1853 for about $1,200. The Church was used by that Society until 1901, when it was moved across the street and became St. John's Hall. Under the pastorate of Rev. Fr. M.D. Charbonneau, whom some of us remember, a new stone church was built on the site.

Upon looking closely at the Hall, one can see how the architecture of the old one resembles the one downtown. When the old church was built and until removed, it had a steeple.

The Essex County History dated 1885 states that there was once a tannery on the present site of the Baptist Church.

"Old Keeseville Tales" carries a story that there was once a house where the church stands and the tannery in the rear.

In the "History of Keeseville " printed in the Essex County Republican in 1950, written by Marjorie Lansing Porter is the following story: "In 1827, George A. Simmons (56) came to Keeseville and as he was considered a promising young lawyer, he was invited to give a July 4th oration to make himself known to the inhabitants thereabouts. the exercises were held in the Baptist Church, which wasn't then enclosed and rough boards were fixed for seats. The villagers formed a fine procession to the church."

This, of course, means the church on the hill. This church was dedicated in 1826.

The Catholics of Keeseville worshiped together in the early days of Catholicism in that section. The first recorded act of the French Catholics as a distinct body was on Oct. 23, 1853, when the bell of the church was formally blessed. The first priest was Father Neyron. The Church was purchased of the Baptists, but it has undergone much modifications and is now a comely structure.

In 1856, Father F. M. Ruiz assumed charge of the parish. On Jan. 6, 1858, Father A. Lebaubanchon became the regular pastor. He remained in that office until May, 1865, when he was succeeded in March, 1866. by Father Legrand, who remained until January, 1869. Six months later, the present pastor, Father Fabiere Barnabé, took charge of the parish.

The latter comprises 300 families, with an average of four to each family.  The Society owns a near parsonage besides the church building. The cemetery connected with the church comprises some five or six acres of land.