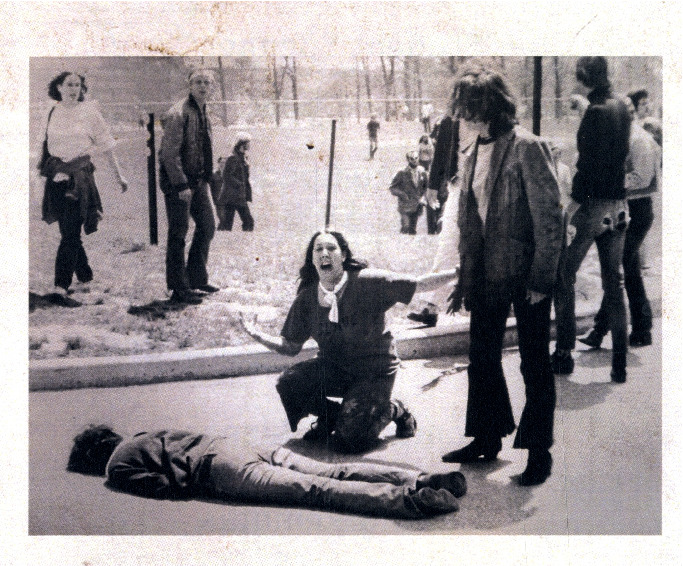 John Paul Filo's famous photograph came to symbolize the trauma of the events at Kent State.  From the SUNY Plattsburgh 2019 Memorial program.

Shock and horror rang out across the country on May 4, 1970, when the Ohio National Guard opened fire on peaceful antiwar protestors at Kent State University.  Four students were killed and nine injured.  Reaction at Plattsburgh State, just like at campuses across the nation, was swift as students mobilized and organized demonstrations while also attempting to process their grief and outrage. 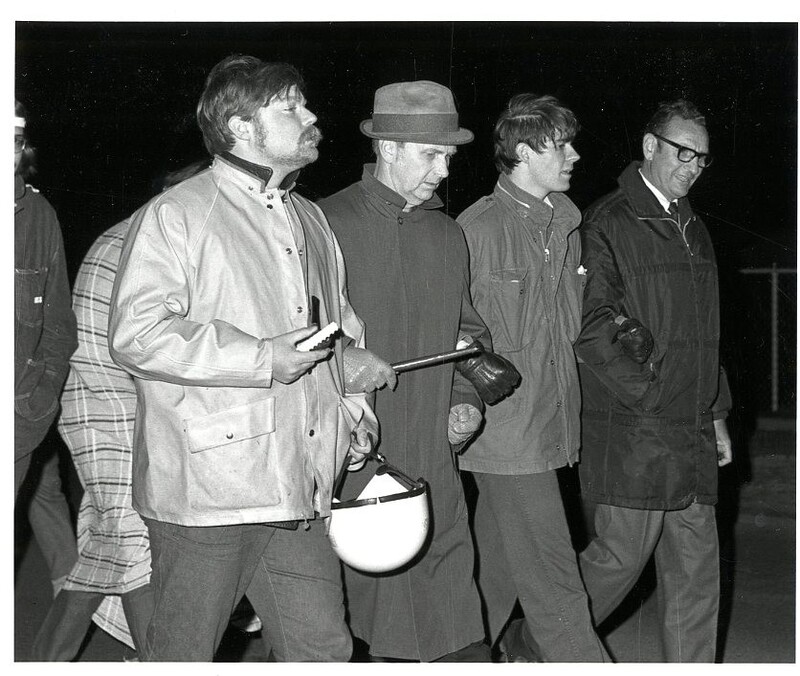 From left to right: Former Student President Richard Schnell, College President George Angell, Student President Jack Reilly, and Mayor Francis Steltzer walking from campus to the Plattsburgh Air Force Base to protest the war and the Kent State shootings.  May 6, 1970. 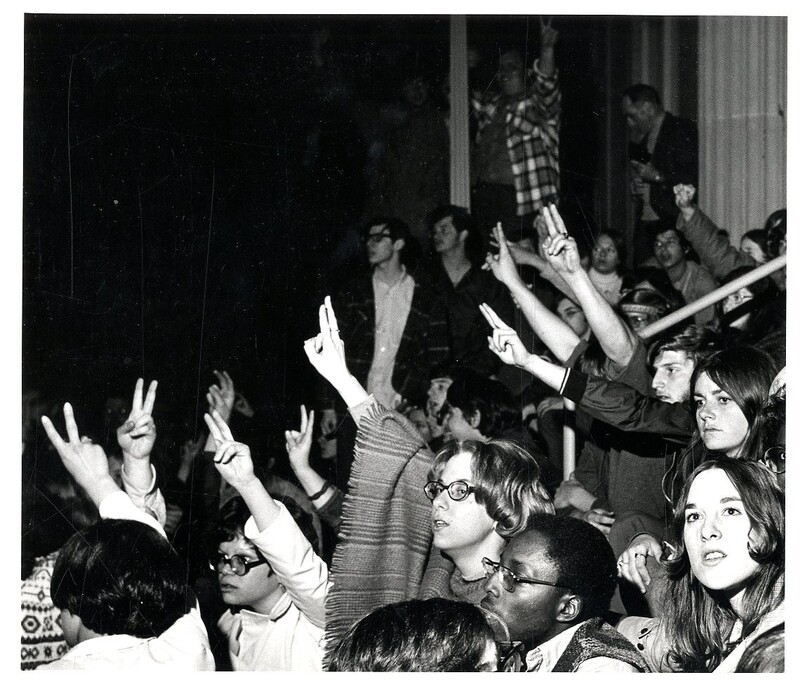 Plattsburgh students letting their feelings be known at the overnight vigil at the Federal Building on Margaret Street.  May 4-5, 1970. 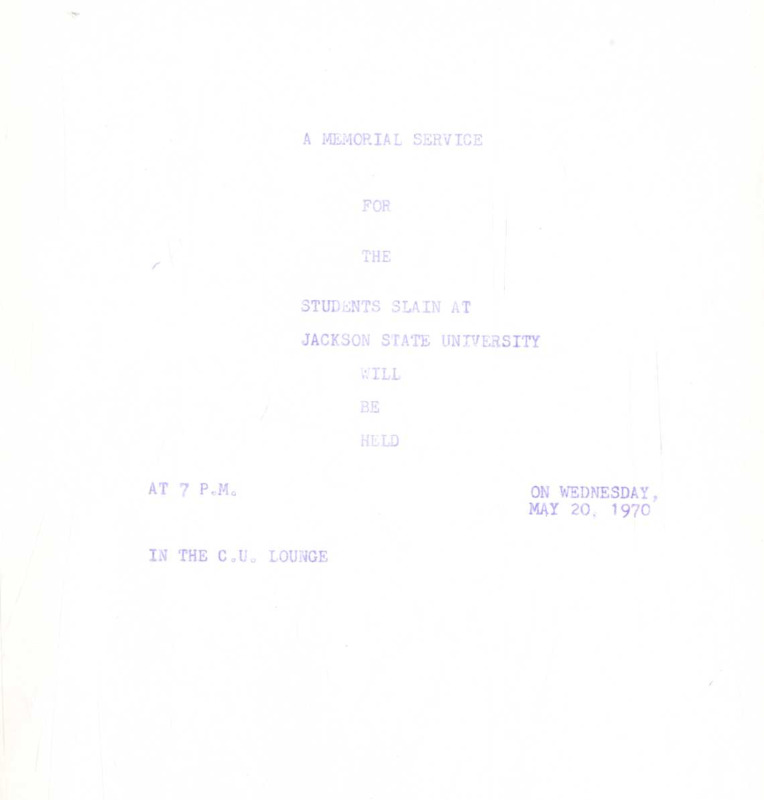 Announcing the memorial service to be held for the victims of Jackson State.  May 1970. 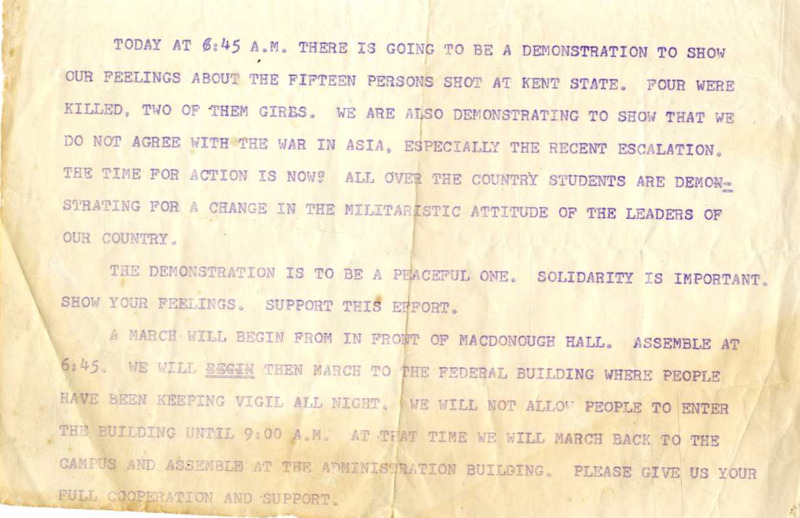 A communiqué calling for an early morning demonstration the day after Kent State.  The marchers were to meet up with those who had kept an all-night vigil at the Federal Building.  May 5, 1970.

We feel that the ideals that these four students died for, do exemplify the overwhelming majority of Americans.

-From the Student Senate statement released after the Kent State killings

At around 9:30 on the night of the killings, after a mysterious campus power outage, students began gathering outside Macdonough Hall.  The group eventually blocked Broad Street as the students made their way towards downtown Plattsburgh. There they peacefully occupied the Federal Building grounds and held an overnight vigil for the victims.  While estimates vary, around 600 people came out throughout the night to mourn and convey their anger and distress.

As the week unfolded, various events were held and the atmosphere on campus underwent a transformation.  A nation-wide student strike to protest the war had already been planned for the beginning of May, but took on a more pronounced significance after the events of Kent State.  The Plattsburgh State Strike Committee negotiated terms of the strike, which after faculty consultation, took effect on May 7 and 8.  They also engaged in a sit-in at Dr. Angell’s office to which he himself had consented.  On Wednesday, May 6, between 1,700 and 2,500 people, including Dr. Angell and Mayor Steltzer, joined a candlelight march from the campus to the Plattsburgh Air Force Base.  Thursday and Friday classes were replaced with seminars, forums, and workshops.  Public participation was encouraged, and some Plattsburgh students also went door-to-door to reach out to the community in this unprecedented moment.

With the arrival of the weekend, around 60 Plattsburgh students headed to the massive protest in Washington D.C. on May 9, while an on-campus memorial was attended by about 500 people.

In Mississippi just eleven days after Kent State, in the early hours of May 15, two young men, one a Jackson State Junior and the other a local high school student, were killed and twelve others injured, when highway patrol officers opened fire on students in a dorm at Jackson State University.  There had been ongoing protests related to both racial injustice and the Vietnam War, notably the disproportionate number of Black men being sent to fight.

Plattsburgh students, as others around the country, were left in disbelief at this second attack on protestors and organized a memorial service for May 20.  Unfortunately, by mid-month, there were markedly fewer students on campus, and much less attention was given to these events.  The national and local media coverage of the shootings was woefully inadequate, and came in stark contrast to that of Kent State – undeniably a result of the skin color of the victims and the context of the killings. 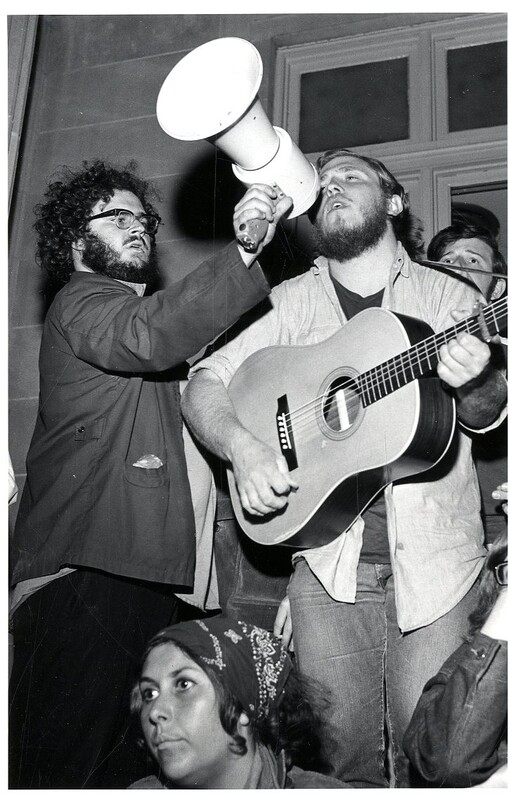 A musical contribution to the overnight vigil in downtown Plattsburgh.  May 4-5, 1970.