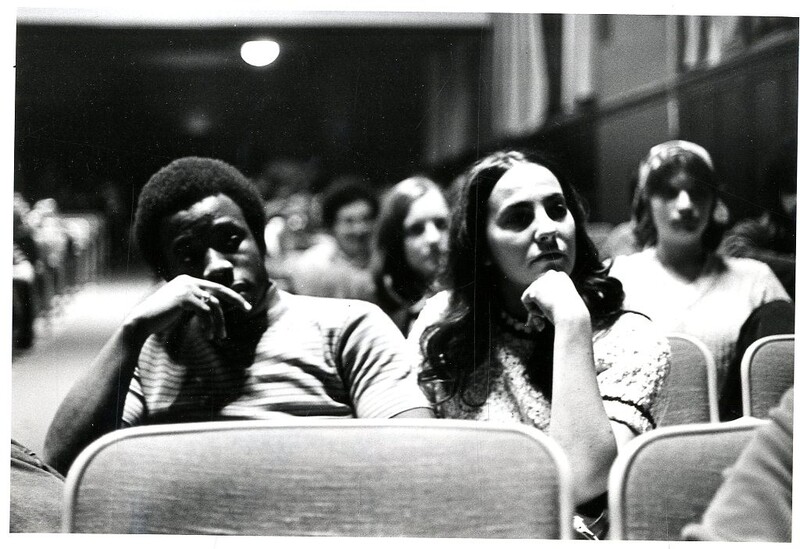 Listening intently during a Student Association seminar on the war in Vietnam.  May 1971.

As befitting a college, the approach adopted by Plattsburgh State’s peace movement was multi-dimensional and fanned out across disciplines and various facets of campus life.

Numerous groups were formed under the auspices of the Student Association; some were local chapters of national student organizations, and others were unique to Plattsburgh.  Groups such as the Plattsburgh Independent Committee for Peace in Vietnam (PICPIV), the Plattsburgh Draft Information Center (PDIC), Students for a Democratic Society (SDS), and the Plattsburgh Peace Council organized sit-ins, vigils, demonstrations, student strikes, teach-ins, boycotts, and community outreach efforts to promote their cause.  Collaboration with outside associations like the Central Committee for Conscientious Objectors and Vietnam Veterans Against the War was beneficial to gaining a wide support network, as well as to keeping pace with the national movement. 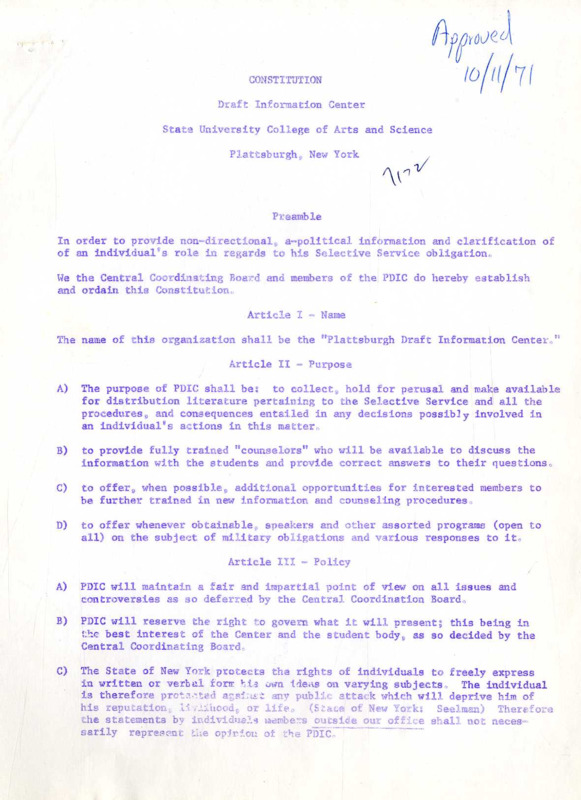 Through the ‘60s and ‘70s, Plattsburgh State’s print media outlets offered extensive coverage of the war, and especially of the campus protest movement.  Northern Light and its successor Cardinal Points, as well as Beekman Street and Big Stink were invaluable resources for the college community, encouraging debate and discussion within their pages, and serving as indispensable methods of mass communication in an era with a vastly different mediascape than today’s.

These were Plattsburgh’s “radicals” who opposed the American involvement in Vietnam long before it became fashionable.

Beekman Street published in-depth interviews with many well-known figures such as civil and animal rights icon and comedian Dick Gregory, and internationally celebrated artist Rockwell Kent.  They both offered their insights into the Vietnam quagmire; Gregory spoke about the connections between poverty, race and military enlistment when interviewed after his performance at Hawkins Hall in September 1967:

They can get a pair of shoes and their first tie and get a physical examination and have medical care.  I think it’s a sad commentary on a supposedly great democracy that a guy has to submit himself to being subscripted to kill people all over the world… because he feels ‘I’m in the army not to kill, but to better my conditions, and if killing goes along with it…'

Ardently opposed to the Vietnam War and devoted to dismantling economic and social inequality, Rockwell Kent (whose name would come to be forever connected to Plattsburgh State with the establishment of his eponymous gallery on campus), spoke at length with Beekman Street in 1968 about American military action in Vietnam:

It is absolutely and completely inexcusable.  It’s not just morally bad – it’s bad because it is a violation of our Constitution and of our solemn pledges to the U.N.

In addition to campus publications, the widely circulated Press-Republican daily newspaper also devoted significant reporting to the activities of the college’s antiwar contingents.  In so doing it afforded many residents of the North Country a perspective they may not have otherwise gained. 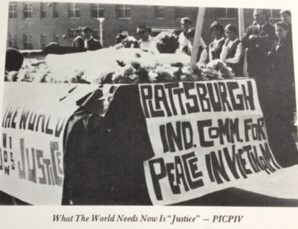 The Plattsburgh Independent Committee for Peace in Vietnam participates in the 1968 Homecoming parade.  Notice the word "Justice" on the left side of the float.  October 1968.

While traditional protests and demonstrations were often the activities of choice, Plattsburgh students did not hesitate to pursue other methods to communicate their dissent.  In response to the Homecoming theme of 1968, “What the World Needs Now,” the parade float of the Plattsburgh Independent Committee for Peace in Vietnam was emblazoned with a succinct “Justice.”

In November 1967, the college theater troupe, the Footlighters, presented “Viet Rock,” a musical described by the playwright Megan Terry as “…a protest play…written more in sorrow than in anger.”  Book reviews on tomes such as Felix Greene’s Vietnam! Vietnam! could be found in the pages of Beekman Street, and both students and faculty would turn out in large numbers to listen to guest speakers when they were invited to the campus.

In December 1969, former US Senator Wayne Morse (D-OR), an outspoken critic of the war, paid a three-day visit to Plattsburgh State and spoke at length about the judicial irregularities and sociopolitical ramifications of American involvement in Southeast Asia.  His visit was widely reported on in both Northern Light and the Press Republican.  The following year, US Senator Charles E. Goodell (R-NY), one of the few antiwar Republicans, was invited to deliver the 1970 commencement address.  His speech, entitled “The War, Dissent, and the Meaning of Peace,” was met with approval by the graduates.

Unfortunately, we (the United States) are for self-determination, many times only when the expected results are to our liking.

-Wayne Morse quoted in Cardinal Points.  He was referring to American involvement in blocking the Vietnam elections of 1956 which had been mandated by the 1954 Geneva Accords.  December 16, 1969. 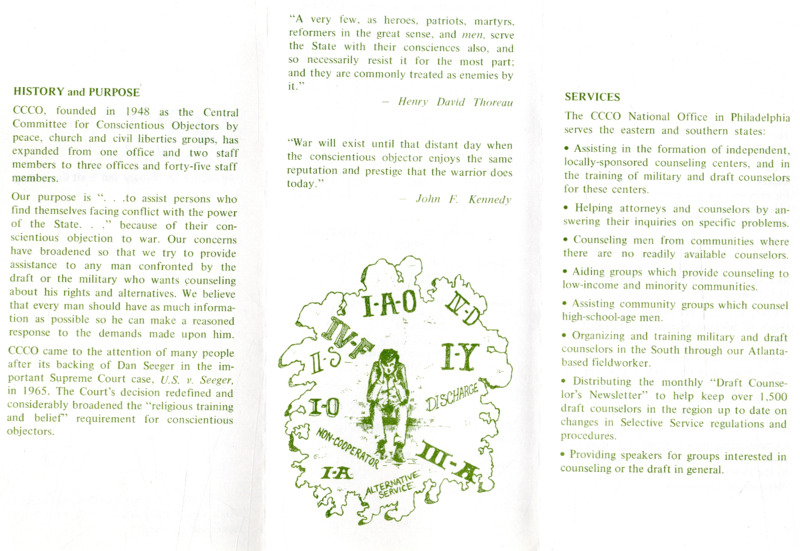 A national association, the Central Committee for Conscientious Objectors ensured that draft information was accessible for everyone.  It also countered the pernicious narrative that draft resistors were criminals or cowards shirking their "duty." 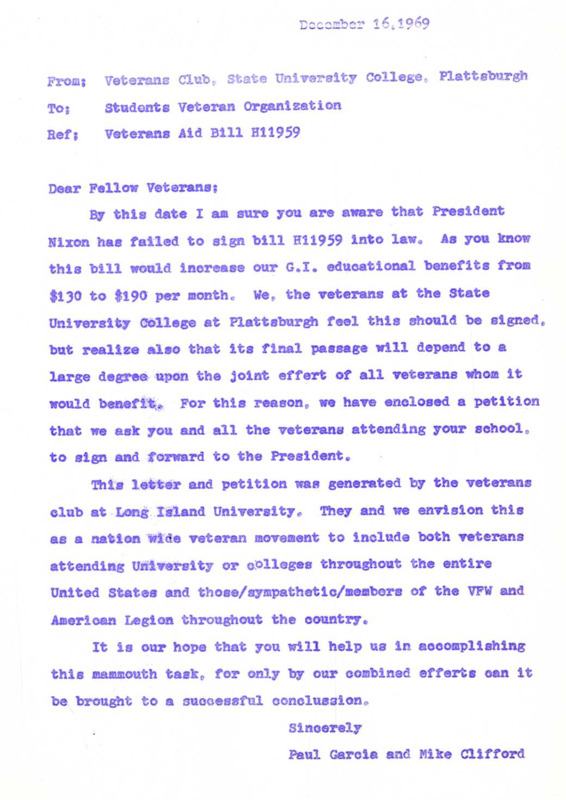 Vietnam veterans were forced to exert pressure on President Nixon to sign into law a bill that would give them access to education benefits equivalent to those offered in the G.I. Bill after WWII and the Korean War.  Nixon made clear that he viewed this demand as unreasonable.  December 1969.

For young people around the country, including students at Plattsburgh State, the draft unsurprisingly proved to be a significant preoccupation.  Keeping informed of the complexities and vagaries of the system was difficult; students often turned to groups like the Plattsburgh Draft Information Center to understand their rights and options, as well as the consequences for draft evasion and resistance.

For the antiwar movement, the draft underscored the tragic arbitrariness and injustice of the war, especially as fighting continued and more young Americans were coming home dead or wounded, or not coming home at all.  Opponents of the war felt justified in accusing successive administrations in Washington of betraying the interests of young people.

Another Plattsburgh State group, one not at all aligned with the antiwar movement, further highlighted this.

The campus chapter of the nation-wide Veterans' Club, at the behest of their counterparts at Long Island University, attempted to encourage other student veterans to petition President Nixon to sign into law H.R.11959.  Among other things, this bill made certain financial benefits available to veterans continuing their studies.  The need to lobby Nixon to uphold promises that had been made to servicemen supported one of the arguments consistently advanced by opponents of the war: young Americans were being misled and sacrificed to protect special interests disguised as lofty notions of “freedom.”  In return they could expect very little.

…I consider the magnitude of the increases contained in H.R. 11959 to require reconsideration for two reasons.  The proposed rates are excessive and their effect would be inflationary.

-President Nixon justifying his refusal to increase benefits to veterans in a letter to Senator Ralph Yarborough, Chairman of the Committee on Labor and Public Welfare.  October 21, 1969.

War Does not Determine Who is Right

The Plattsburgh State Draft Information Center sponsored the Spring Peace Action of 1972.  A multi-day event, it brought local chapters of Veterans Against the Vietnam War to the campus for workshops, seminars, discussions, and a march to the Plattsburgh Air Force Base.  May 1, 1972.